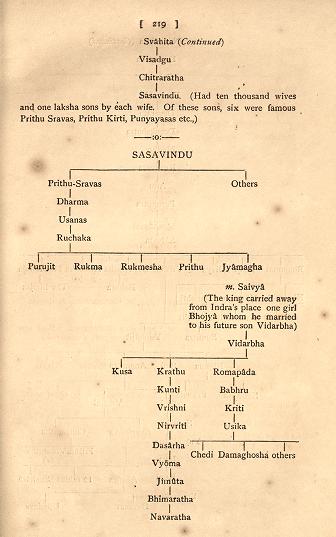 Sasavindu (ससविंदु) or Shashabindu (शशबिन्दु) was ancestor of Prithu and Ushana and was king in Yaduvansh after 6th generation of Yadu. He was a chakravarti king. He had married with large number of queens and thus had many sons. After three generation of him was the king Ushna. Maharaja Ushna performed hundred Ashvamedha Yagyas and got the title of yat. According to the historian Ram Lal Hala, the word Jat is derived from word 'Yat'. The king 'Yat'(Ushna) was in Chandravansh was ancestor of Lord Krishna. The Jats are descendants of King Yat. 'Yat' later changed to 'Jat'.[1]

As per Bhagavata Purana ancestry of Sasavindu is as under:

Shashabindu had ten thousand wives and one lakh son by each wife. Of these six were famous Prithu Sravas, Prithu Kirti and Punyayasas etc.