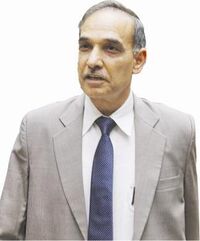 Dr. Satyapal Singh (Tomar) is currently the Member of Parliament (Lok Sabha) from BJP. During 2014-2019, He was state minister of Education in Central Govt. In the Parliamentry election from Bagpat Constituency in mid-May 2014, he had defeated Chaudhary Ajit Singh, then Civil Aviation Minister and the MP, From Bagpat.

In Lok Sabha elections held in May 2019, he was once again successfully elected.

Born on November 29, 1955, in Basauli in Meerut district of Uttar Pradesh, Mr. Singh had aimed to become a scientist before he joined the IPS. He is a post-graduate in chemistry and has also done his M Phil (Chemistry). He has secured an MBA from Australia and is also has an MA and Ph.D in Public Administration.