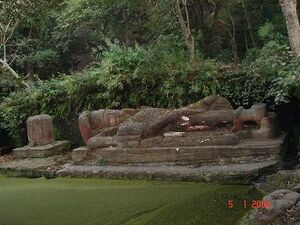 Divine serpent on whom Vishnu rests

Balarama (बलराम) Balrama (बलराम), also known as Baladeva, Balabhadra and Halayudha, is the elder brother of the divine being, Krishna. Within both the Vaishnava traditions and Hinduism generally he is acknowledged as being a manifestation of Shesha, the divine serpent on whom Vishnu rests.

Ram Sarup Joon[3] writes that ....The rulers of Magadha of the Shesh Nag Dynasty were Takshak Jats. Todd writes that they ruled Mugadha for six hundred years.

[p.330]: The Nagas were serpent worshipping non-Aryaan civilized race of ancient India. Many localities and cities were named after them e.g. Nagpur, Nagardhan (Nagar-Vardhan), Nagar, Karkotnagar Nagarkhonda, Nagarkot, Nagarkoil etc. They flourished in North, East, Central and South India in ancient time. The evidences from the Puranas and other sources show that the Naga kings ruled at Takshila, Tankshar, Singhpur, Tonk, Mathura,Karkotanagar, Mathura, Indaurpura, Padmavati, Kantipuri, Vidisa, Purika, Nagpura, Nandi-Vardhan, Eran, Paithan, etc. In Mahabharata period these Nagas were ruling in North West with their capital at Takshila and at Patalpuri around present Karachi and Hyderabad. From there they drifted to south and east i.e. from the Panjab to Rajasthan and Madhya Pradesh in a time which cannot be ascertained now. The Puranas l divide the Naga dynasty of Vidisa into two parts:

The first part belonged those kings who flourished before the end of the Sungas with their capital at Vidisa (31 B.C.). The Kings before this period in the Naga dynasty were Sesha, Bhogin, Ramchandra, Nakhvan, Dhanavarman or Dharma Varnan and Vangara.

At this period the Andhra Kings 2 had taken Susarman (The, last Kanva King) a prisoner and destroyed whatever had been left of the Sunga power at at time (at Vidisa). This statement of Puranas refer to the Andhra or Satavahana period, when they became emperors of Aryavarta in addition to their being the emperors of Dakshinapath at about 31 B.C. 3 It means, perhaps due to pressure from Satavahanas they shifted their capital to Padmavati.

Before proceeding further let us see how the Vayu Purana has called these Vidisa Nagas, Vrisha or Siva's bull i.e. Nandi, with which, the names of the kings coming after the close of the Sunga dynasty, end. It seems that the title Bharsiva which was taken up later is connected conceptually with the Vrisha of the Vayu and the Nandi. 4 It means these Nagas were ethnically5 related to Bharsivas or Nav Nagas (Taka a family

The second part of these Nagas belonged to those kings who flourished after the end of the Sungas. The names of these post Sunga Nagas were Bhuta Nandi or Bhutinandi, Sisunandi and Yasonandi. It appears that from the time of Bhutanandi, when the dynasty was reestablished, they made Padmavati their capital. There is a positive confirmation of the existence of these post Sunga Nagas in the first century A.D. At Padmpawaya, which is the site of Padmavati, a statue of Yaksha Manibhadra was dedicated by some members of a public body in the fourth year of the reign of "King Svami Sivanandi"7. Similarly a famous Sivalingam called Swarn-Vindu was also established there. The plat form of the Swarn-Vindu Siva has been discovered by Mr. Garde at Pavaya. 8 An image of Nandi, with human body and Bull's head has been found there .

Let us take series of coins which according to Jayaswaal9 belongs to this early Naga dynasty. Some of the Coins are generally assigned to Mathura. In the British Museum there are coins of Seshadata, Ramdata and Sisuchandra-data. The script of the Seshadata's coin is the oldest and belongs to the first century B.C. In the same series, there are coins of Ramadata. These coins, according to the opinion of Jayaswal, are identical with Sesha-Naga, Ram-chandra and Sisu Nandi of this dynasty.

As the Puranas generally omit the names when a dynast comes under an over Lordship, Shiva nandi was probably the king superseded by Kanishka. It is stated in the Puranas that Padmavati passe under a ruler named Vinvasphani, who is to be identified with the viceroy of Kanishka, Mahakshatrapa Vanaspara.11 It proves that during the period 80-175 AD comes the Kushana rule with the withdrawal of the Naga Kings to Purika and Nagpur-Nandi-Vardhana in the central provinces. 12

Pedigree and chronology of the Nagas of Vidisa

After a lot of discussion K.P. Jayaswal gave the following pedigree and chronology of the Nagas of Vidisa :

[p.332]: Jayaswal has pointed out that last five kings are known only from inscriptions and coins. Their order of succession is also uncertain. All the 13 Naga Kings covered a period of about 200 years from 110 BC to 78 AD. 13