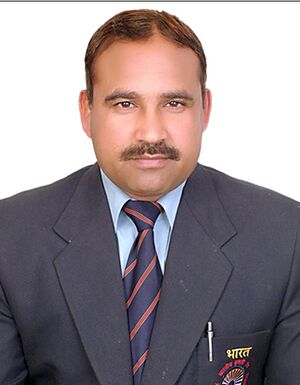 Ace wrestling coach whose technical skills have reshaped Indian wrestling and hundreds of wrestlers have achieved their life time dreams. It is his selfless devotion and dedication towards this sport that wrestling have become much popular sport nowadays. His disciples have won medals in almost all the tournaments at international level. His application of advanced techniques have proved a boon for Indian wrestling. Besides training senior wrestlers, he is also preparing promising juniors who are proving themselves at their competitions, giving us proud moments.

Sh.Anoop Singh Dahiya is currently imparting training to Haryana Police Wrestling team. He is serving as Deputy Superintendent of Police in Haryana Police. A true Gentleman, gem of humanity, he is courageous, capable, hard working, cooperative, courteous and a hard working person.

His coach Sh Tarachand Pahalwan was a brave man and martyr of soil who laid down his life fighting terrorists at Ambala Judicial complex on 12 April 1989. In the memory of Shaheed Tarachand Pahalwan a Dangal is organised every year. In his memory setting up of an academy is also in process. He is a man of vision with a mission.

He was decorated with State Sports Award in 1992. He was bestowed upon with President Police Medal in 2014. He was conferred with Dronacharya Award in 2015.

Back to The Wrestlers/ The Administrators