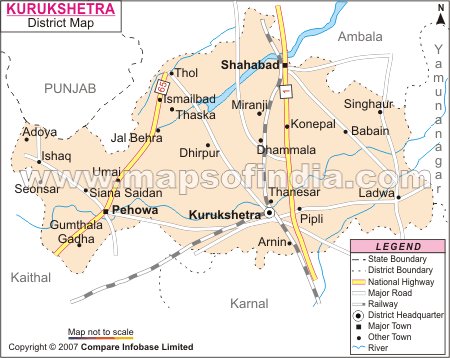 Location of Shahabad in Kurukshetra District

Shahabad (शाहाबाद) or Shahbad is a town and tahsil in Kurukshetra district Haryana.

The Diwan takes refuse at Shahabad:

Nanun Mal was on his road back from Karnal when he heard of all that his enemies had accomplished against him.

Understanding that, till fortune changed, it would be madness to return to Pattiala where he could only expect imprisonment or death, he took refuge with Sirdar Karm Singh of Shahabad.*

The treachery of the Chief of Shahabad:

This Chief promised him not only protection but assistance to recover his power in Pattiala, but treacherously wrote to Raja Sahib Singh, telling him of the arrival of the fugitive and urging him to take Ghanor before the Diwan could raise troops and come to the help of his relatives. Nanun Mal with difficulty collected a small force and marched to the relief of the fort ; but on the road he heard of its capture, his men deserted, and he was obliged to seek a new asylum in the Kythal territory, where he took up his residence at the little village of Chikah, close to the Pattiala

* Karm Singh was an immigrant from the Manjha, in 1759. The Shahabad district had been seized by several Chiefs of the Nishania confederacy, the widow of one of whom, Himat Singh, gave to Karm Singh five villages. In return for this kindness, Karm Singh obtained a grant of her whole estate from Dehli, and ousted her from all but the village of Islamabad. This conduct scarcely agreed with his agnomen of “Nirmala” or spotless. He died in 1808, leaving four sons, Ranjit Singh, Sher Singh, Kharak Singh, and Kahn Singh, who divided the estate equally between them in 1811. Kharak Singh died without issue, in 1831, and his share was balloted to his full brother Sher Singh. The latter died in 1861, and his only son, Kesra Singh, a year and a half later, when the estate, valued at Rs. 11,500, was resumed by Government. The other shares are still held by Sirdars Dharm Singh, Kishan Singh and Partab Singh. The two former are the sons of Sirdar Ranjit Singh, and their estate is worth Rs 5,237 per annum ; while that of Partab Singh, the son of Kahn Singh is worth Rs. 3,682.