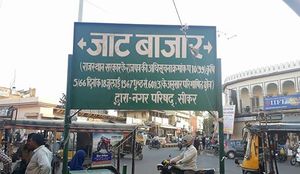 He was a businessman & worked in Kolkata (Bengal). After that he came back to Sikar HQ & opened a shop of Grain & Ghee etc. At present the market called Jat Bazar & his old house is also situated there in front of Surajpole Gate & near by the Head Post Office of Sikar HQ. He gave the only name of 'Jat Bazar' in Rajasthan State. Later on the Government of Rajasthan had published the name of Jat Bazar in the Gazette Notification No. F 10(99)/Krishi-5/66 dtd. 18th July, 1967 page No. 601(3). He expired on 3rd July, 1993 & writer of these lines was proud of his "Antim Darshan" on that particular day in funeral.