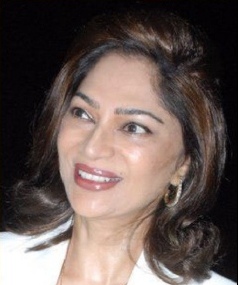 Simi Garewal (born 1944) is an Indian Bollywood actress. Born in India, to a Garewal family, her father was a brigadier in the Indian Army. She grew up in England and developed an impeccable English accent that landed her in a English-language film Tarzan Goes to India in 1962 with Feroz Khan. She came back to India as a teen to become an actress and had to learn Hindi. In the 1960s and 70s she played in Bollywood movies, working with leading directors such as Raj Khosla in Do Badan, Raj Kapoor in Mera Naam Joker, (1970), Satyajit Ray in Aranyer Din Ratri (Days & Nights in a Forest) and Mrinal Sen in Padatik]' (The Pedestrian). She also starred in Columbia Pictures' Siddhartha, based on the Siddhartha book by Herman Hesse, a role in which Garewal did a nude scene that caused some controversy in India. She was once married to O.P. Bahl, which did not last long. By the mid 1970's, her career was running out of steam, as she had a small peripheral role in a popular film like Kabhi Kabhie (1976) and a starring role in the flop Chalte Chalte (1976).

She made a strong impression in her comeback as a vamp in Karz (1980). But then her attention turned to writing and direction, forming her own production company, Siga Arts International. Her 3-part documentary on Rajiv Gandhi titled India's Rajiv received acclaim. She also wrote and directed a Hindi feature film Rukhsat and produced television commercials. Today she anchors the popular talk show Rendezvous with Simi Grewal, now in its 8th year. She wears her signature white clothes on TV shows and at award ceremonies, and is popularly known as "The Lady in White". She is currently working in a show named "Virassat" on Star One.