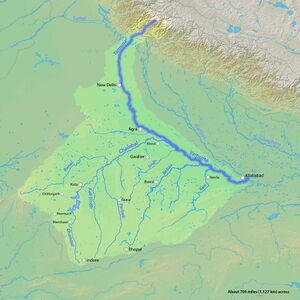 Map of Yamuna River & its tributaries 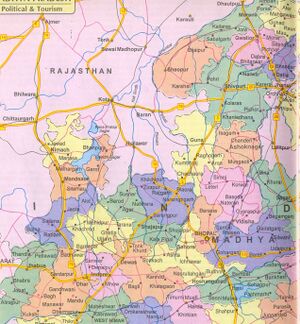 Rivers in Rajasthan and Madhya Pradesh

Sindh River (सिंध नदी) is a tributary of the Yamuna River, flows through the Indian states of Madhya Pradesh and Uttar Pradesh.

The Sindh River originates on the Malwa Plateau in Vidisha district.

Apart from this, Manikheda Dam has been built across the Sindh River where the majority of the surrounding regions are benefiting through this. The drinking water and irrigation requirements are facilitated through this river.

The major tributaries are:

Pahuj (Pushpavati) - Pahuj River is the waterway flowing through the historical city of Jhansi situated in Uttar Pradesh. The river originates from the hills of Jhansi district of Uttar Pradesh and and Tikamgarh of Madhya Pradesh.

It is the tributary of Sindh River that further joins the Yamuna River in Etawah of Uttar Pradesh state. The river has also been given another name “Pushpavati” in several religious texts. Pushpavati (पुष्पवती)(III.83.12) is mentioned in Vana Parva, Mahabharata/Book III Chapter 83. It says fasting there for three nights one sanctifieth his own race, besides earning the merit of the gift of a thousand kine.

This river also flows through Unnao Balaji 20 km from Jhansi, famous for Sun Temple and people. It is a tributary of the Sindh River, which joins the Yamuna River in Etawah, Uttar Pradesh state, just after the Chambal River confluence with the Yamuna river.

It is a small and dry river which passes through the Indian Grassland and Fodder Research Institute, Jhansi.

Mahuar - Flowing from the state of Madhya Pradesh, Mahuar River is the tributary of Sindh River. Summers can be really scorching here, all rock and heat. The only respite is this small watercourse called Mahuar. It is not a small river, but during summers the water levels dips. However, the river still runs deep enough to give a cool dip during scorching months.

Kunwari - Kunwari River often spelled as “Kwari river” flows in Bhind, Morena districts of Madhya Pradesh. The river has been branched out of Sindh River and merges with Yamuna River in the Etawah district. Districts like Kailaras, Sheopur, Morena and Bijeypur are situated on the banks of this river. 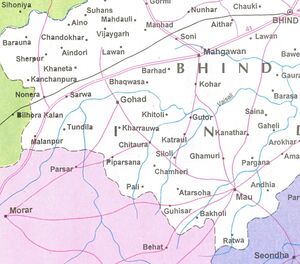 Course of Vaisali River near Gohad in Bhind District

Vaisali River: It flows in Bhind District and Gwalior districts. It originates in Gwalior district near Behat. The site of Gohad Fort was selected strategically on the Vaisali River where it takes a circular turn. The Gohad fort is in circular shape. It is protected by the rampart constructed around the fort in a length of 5 km. The river was dug and flow of river was extended up to the fort to take a semi circular shape. Other important town on its course is Khitoli in Bhind. It meets Sindh River.