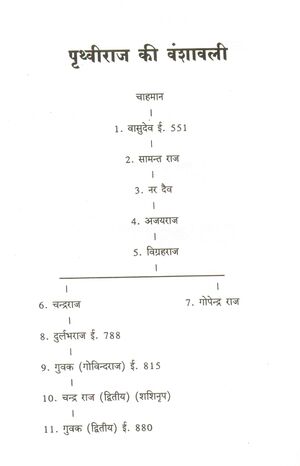 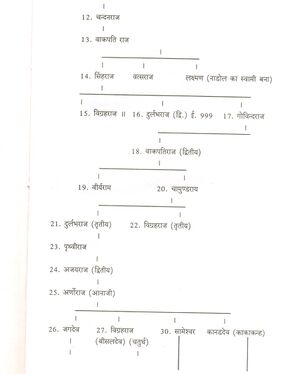 Sinharaja (944-964 A.D.) was a ruler of Chauhan dynasty with capital at Sambhar. He was the first of the Chauhan dynasty, who adopted the title of maharajadhiraja and had declared himself independent from the Pratihara dynasty.

Vakapatiraja I was succeeded by his son Singhraj (S.No.14 in Chart) :the first maharajadhiraja. He was the first of the Chahamana dynasty who adopted the title of maharajadhiraja. This also indicates that he had declared himself independent from the Pratihara dynasty. Harsha inscription indicates that Singhraj had defeated Tomara leader Salavana and had made many princes and samantas as his prisoner. Pratihara king had come to Singhraj for the release of the said provinces and samantas. Singhraj was a very generous and charitable man. He had donated several villages to the temple of Harshanath.

The overlord mentioned in the Harsha inscription as Raghukule bhuchakravarti (the emperor belonging to the Raghu family) can be identified with Paramabhattaraka-Maharajadhiraja-Parameshvara Vijayapaladeva of the Rajorgarh inscription (V. 1016), a weak Pratihara ruler incapable of controlling the vast territories of the empire of Kanauj. [1]

For Simharaja's reign we have the Thamvala inscription of 'V. 1013 (956 AD). Its transcript shows that Simharaja bore the title Maharajadhiraja. His father, Vakpati, had to remain content with the title of Maharaja, though he won 188 victories. Further, the inscription testifies to his mastery over the territory that included Merta and probably, also Pushkar. That Simharaja was a Saiva is known from the Harsha inscription of V. 1030 (973 A.D.). From this inscription, we further gather that he was a worshipper also of Aditya, i.e., the Sun.

Simharaja 's son, Vigraharaja II, is described in the Harsha inscription as "rescuing the, fortune of his family and the Goddess of Victory from the distress that had befallen them". [2] Simharaja's end therefore might have been rather tragic. Perhaps he ultimately succumbed to a strong combination of his numerous enemies among whom might perhaps be included also the incensed Pratiharas of Kannauj.

Harsha Inscription gives us following information about the villages gifted by Simharaja and his decendants to Harshanatha in V.S. 1030 (973 AD):

L-33:Hail ! in the Samvat year 1030, in the month of Ashadha, the first division of the month, the 15th day, the deeds of conveyance, as they were severally received, are written in the following order.

L-34: The great king, the king of kings, the blessed Sinharaja in the 12th day of the sun's mansion in the sign of Libra, attached [to this temple the village of] Sinhaprostha (Sinhasan (सिंहासन), near Piprali, Sikar), with its revenues and produce, which were his own.
He likewise made over by deed of gift, as long as moon, sun, and ocean should endure, Ekalaka (Akwa ?), Krisānu-kūpa (? Kari + Sandau) and Urusara (Rewasa), in the district Patta-Badaka, together with the hamlet of

L-35: Kashahapallika (Kasli) in the Koha district) , being four villages in all, to Sri Harsha-deva, the all-sufficient protector, seated on the hill whose sign is the moon—on a holy day, remembering the sacred resort of pilgrims Pushkara, near Ajmer] for the sake of the solemn celebration of festive journies thither, accompanied with ablutions, bodily unctions, burning of incense and lamps ; [that the same may be performed by the brahmans of Harsha without lose].

L-36: Likewise, his brother, the blessed Vatsaraja, made over by deed of gift the swabhoga village of Karddamakhata (Kadma Ka Bas), whose revenues had been possessed by himself, for the purpose of obtaining victory.

Likewise, two villages {Chhatradhara (Harsh) & Sankaranaka (Sakrai} were made over with a deed of gift, by the blessed Vigraharaja, as it is written above- [See verse-25].

Likewise, the two sons of the blessed Sinharaja, i.e. the blessed Chandraraja and Govindaraja,

L-37: did religiously convey Patakaddaya (Patauda ?) and Pallika villages from svabhoga district Pattabadaka , whose revenues were possessed by themselves, with a deed of gift entirely written with their own hand, even to the prescribed formal enumeration [of name, family, date, etc], having first taken the holy water; thus having made a record to all future times.
The blessed Dhandhuka, though unconquered by the subjects of Sinharaja, did, nevertheless, by permission of his liege lord, make over the village of Mayūrapura (Mordunga), whose revenues were received by himself, in the district of Khadgakupa (Khandela Sikar).

L-38: Likewise, the young prince, the blessed Jaya-Sri-raja, religiously bestowed on Harsha-deva, the village of Kolikupaka (Kolida), whose revenues were received by himself.

L-39: Likewise, by a lady named Tāvika, one village, in a northern direction, was given through divine love to Sri-Harsha.

Sinharaja Chauhan's younger brother in 960 AD founded Nadol branch of Chauhans. His decendant was Asaraja (1110-1122 AD), his son Manak Rao was originator of Khichi branch who visited Jayal in 1111 AD.