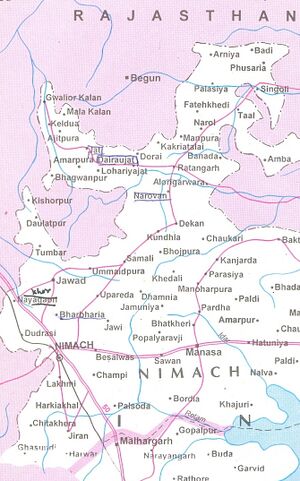 Singoli () is a village in tahsil Jawad in Nimach district in Madhya Pradesh.

About a mile to the north-west are the remains of a temple to Vijyaseni Bhavani, the Pallas of the Rajpoots. James Tod found a tablet recording the piety of the lord paramount of the Pathar, in a perpetual gift of lights for the altar. It runs as in the box.

This is a memorial of the celebrated Rana Mokul of Mewar, whose tragical death by assassination has been recorded in the annals of that state.

By means of this simple tablet, we detect an anachronism in the chronicle. It is stated in page 240 of the first volume, that Koombho succeeded his father Rana Mokul in S. 1454, or two years anterior to the date of the grant of lights for the goddess. Such checks upon Rajpoot chronology are always falling in the way of those who will read as they run.

Mokul was one of the most celebrated of this race ; and he defeated, in a pitched battle at Raepoor, a grandson of the emperor of Dehli. He was the father of Lal-Bae, called ' the Ruby of Mewar' regarding whom we have related a little scandal from the chronicle of the Bhattis (see p. 231) : but the bard of the Kheechies, who says that prince Dheeraj espoused her in spite of the insult of the desert chief, had no cause to doubt the lustre of this gem.

* A name of Sukra-acharya the Regent of the planet Venus. The ' star of eve' is always called Sukra.