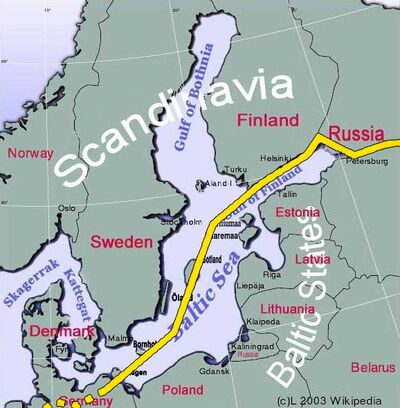 Skagerrak is a strait running between the southeast coast of Norway, the southwest coast of Sweden, and the Jutland peninsula of Denmark, connecting the North Sea and the Kattegat sea area, which leads to the Baltic Sea.

Both names Skagerrak and Kattegat are commonly held to be of Dutch origin. Skagerrak means in Dutch approximately 'Skagen Channel'. The Danish town of Skagen (The Skaw) lies at the northern tip of the Danish mainland. Rak means 'straight waterway' (compare the Damrak in Amsterdam); it is cognate to 'reach'.[1][2] The ultimate source of this syllable is the Proto-Indo-European root *reg-, 'straight'. Rak means 'straight' in both modern Norwegian and Swedish.