Somadatta (सॊमदत्त) was a king of Bahlika Country during Mahabharata. He was was the son of King Balhika, who was the elder brother of Shantanu. He was son of Bāhlīka (one of the three sons of Pratīpa). He had three sons, named Bhūri, Bhūriśravā and Śala. [1]Somadatta was the king of of Soron, who built a fort there.[2] 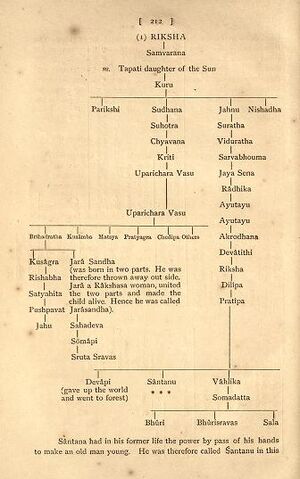 Alexander Cunningham[4] writes that from Ahi-chhatra the Chinese pilgrim Xuanzang proceeded in a south direction a distance of from 200 to 270 li, from 23 to 25 miles, to the Ganges, which he crossed, and then turning to the south-west he arrived in the kingdom of Pi-lo-shan-na[5] His route to the south -would have taken him through Aonla and Budaon to the Budh Gunga (or old Ganges), somewhere near Sahawar, a few miles below Soron, both of which places stood on the main stream of the Ganges so late as 400 years ago. As his subsequent route is said to have been to the south-west, I believe that he must have crossed the Ganges close to Sahawar, which is 42 miles from Ahi-chhatra in a direct line. From all my early inquiries I was led to believe that Soron was the only ancient place in this vicinity ; and as Hwen Thsang does not give any distance for his south-west march, I concluded that Soron must have been the place to which he gives the name of Pi-lo-shan-na. I accordingly visited Soron, which is undoubtedly a place of very great antiquity, but which cannot, I think, be the place visited by the Chinese pilgrim. I will, however, first describe Soron before I proceed to discuss the superior claims of the great ruined mound of Atranji-Khera to be identified with the Pi-lo-shan-na of the Chinese pilgrim.

Soron is a large town on the right, or western, bank of the Ganges, on the high-road between Bareli and Mathura. The place was originally called Ukala Kshetra ; but after the demon Hiranyaksha had been killed by the Varaha Avatar, or Boar incarnation of Vishnu, the name was changed to Sukara Kshetra, or

[p.365]: " the place of the good deed." The ancient town is represented by a ruined mound called the Kilah, or " fort," which is one quarter of a mile in length from north to south, and somewhat less in breadth. It stands on the high bank of the old bed of the Ganges, which is said by some to have flowed immediately under it so late as 200 years ago. The modern town stands at the foot of the old mound on the west and south sides, and probably contains about 5000 inhabitants. There are no dwellings on the old mound, which is occupied only by the temple of Sita-Ramji and the tomb of Shekh Jamul ; but it is covered with broken bricks of large size, and the foundations of walls can be traced in all directions. The mound is said to be the ruins of a fort built by Raja Somadatta of Soron many hundred years ago. But the original settlement of the place is very much older, being attributed to the fabulous Raja Vena Chakravartti who plays such a conspicuous part in all the legends of North Bihar, Oudh, and Rohilkhand.

Adi Parva, Mahabharata/Book I Chapter 177 mentions Kshatriyas who came on Swayamvara of Draupadi. Somadatta (सॊमदत्त) is mentioned in Mahabharata (I.177.14).[6]..... Somadatta of the Kuru race with his three sons, all mighty chariot-fighters and heroes, viz., Bhuri, Bhurishrava, and Shala.

Sabha Parva, Mahabharata/Book II Chapter 31 mentions the Kshatriyas who brought tributes on Rajasuya sacrifice of Yudhisthira. Somadatta (सॊमदत्त) is mentioned in Mahabharata (II.31.8). [7].....and Somadatta, and Bhuri of the Kuru race, and Bhurisrava and Shala; and Aswatthama, Kripa, Drona, and Jayadratha, the ruler of Sindhu;....

Udyoga Parva/Mahabharata Book V Chapter 158 mentions gambler's son (Uluka) addressing Yudhishthira repeating the words of Duryodhana. Somadatta (सॊमदत्त) is mentioned in Mahabharata (V.158.38). [8]....As regards my army, it is a veritable ocean with Saradwat's son as its large fish; Vivingsati, its smaller fish; Vrihadvala its waves; Somadatta's son its whale; Bhishma its mighty force; Drona its unconquerable alligator; Karna and Salya, its fishes and whirlpools; Kamboja its equine head vomiting fire, Jayadratha its (submarine) rock, Purumitra its depth, Durmarshana its waters, and Sakuni its shores!

Bhisma Parva, Mahabharata/Book VI Chapter 47 describes immeasurable heroes assembled for battle. Somadatta (सॊमदत्त) is mentioned in Mahabharata (VI.47.18).[9]....And Bhurisravas, and Shala, and Shalya, and Bhagadatta, O sire, and Vinda and Anuvinda of Avanti, protected the left flank. And Somadatta, and Susarman, and Sudakshina, the ruler of the Kambojas and Satayus, and Srutayus, were on the right flank.

Bhisma Parva, Mahabharata/Book VI Chapter 93 mentions Duryodhana's consultation with his counselors on how to defeat Pandavas. Somadatta (सॊमदत्त) is mentioned in Mahabharata (VI.93.4).[10]....Then king Duryodhana, addressing the Suta's son and the mighty Sakuni, said unto all those counselors of his, Drona, Bhishma, and Kripa, and Shalya and Somadatta's son do not resist the Parthas. I do not know what the cause is of such conduct (of theirs). Unslain by any of these, the Pandavas are destroying my forces.

Karna Parva/Mahabharata Book VIII Chapter 4 mentions the warriors who are dead amongst the Kurus and the Pandavas after ten days. Somadatta (सॊमदत्त) is mentioned in Mahabharata (VIII.4.17).[11] ....The kinsman of the Kauravas, the son of Somadatta, the brave and celebrated Bhurishrava, O king, hath been slain by Satyaki in battle.