Location of Bhinmal in District Jalor 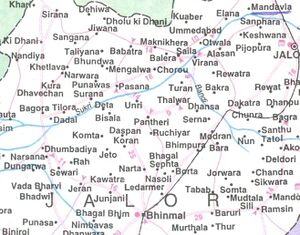 Location of Bhinmal in Jalor District

Bhinmal (भीनमाल) is town and tahsil in Jalor district in Rajasthan. Its ancient name was Shrimala (श्रीमाल).

Ram Sarup Joon[1] writes that Jats accepted Gujar leadership because Gujars were Buddhists and had arisen for a noble cause. The Jats who joined the Gujar force also came to be known as Gujars by and by. Kings of Solankhi Gotra,

The proof ofParmars and Pratihars being Gujars or Huns is that there was a town named Jablapuri which both these kingdoms claimed as their heritage. Jabila (Hun) was the chief of the tribe.

Bhinmal was the early capital of the kingdom of the Gurjars during medieval period.[2] The name of the town during the medieval age was Bhillamal (भीलमल). Hiuen Tsang visited Bhillamal in about 641 AD. According to Hiuen Tsang Bhillamala was capital of Gurjara kingdom. He stated that the Gurjars ruled a rich and populous kingdom with capital at Bhinmal (Pilo-mo-lo).[3]

This city has witnessed many rises and falls. Stone inscriptions of the year V. 1333 (1277 AD) are found among ruins of temples. There are signs here and there showing that Lord Mahavira Swami, the 24th Jain Tirthankar wandered about here. They can provide historical evidence to researchers. The King of the place was a Kshatriya, celebrated for his wisdom and virtue, a believer in Buddhism and a man of exceptional abilities. He was just twenty years old. The people of the place were flourishing. Brahmanism dominated the city. There was only one Buddhist monastery with 100 brothers.

Ala ud din Khilji also destroyed Srimala when he conquered Jalore in 1310 AD. Before that Srimala was a premier city of northern India. The city was laid out in the shape of a square. It has 84 gates. The mid-15th century chronicle Kanhadade Prabandha provide description of many Islamic attacks on Bhinmal.

There were several temples of Jain Tirthankar and Hindu god-Ganapatis, Kshetrapalas, Chandikadevis, Shivalingas and others. The temple of Bhinmal known as Jagatsvami temple was one of the earliest and most famous temples of Rajasthan. The temple had beautiful torana (archway). The temple was perhaps built during the reign of Gurjara Pratiharas who were sun worshippers. A festival was held at temple in the Hindu calendar month of Asvin.

Centre of learning - The town is the birth place of the Sanskrit poet Magha and mathematician and astronomer Brahmagupta. Bhinmal was a great centre of learning. The scholars of Srimala were known far and wide for their scholarship and learning. The well known Sanskrit poet Magha , the author of Sisupalavadha also lived here in 680 AD. Brahmagupta was born in 598 AD in Bhinmal. He is likely to have lived most of his life in Bhillamala (modern Bhinmal) in the empire of Harshavardhana. As a result Brahmagupta is often referred to as Bhillamalacarya, the teacher from Bhillamala (Bhinmal). He was the head of the astronomical observatory at Ujjain, and during his tenure he wrote two texts on mathematics and astronomy: The Brahma Sphuta Siddhanta in 628 AD, and the Khandakhadyaka in 665. The well known Jain scholar Siddharshi Gani, a resident of Bhinmal wrote Upmitibahava prapancha katha in 905 AD. The Jain Ramayana was written by Jain monk Vijayagani in 1595 AD. Jain Acharya Udyotan Suri wrote kuvyalmala (a Sanskrit story book) here.

The city of Bhinmal had four gates. At a distance of 8 kilometres in the north there was the Jalori gate, in the south Laxmi gate, in the east the Sun gate and in the west Sanchori gate.

James Tod[4] writes that Bhinmal and Sanchor are the two principal subdivisions to the south, and together nearly equal the remainder of the province, each containing eighty villages. These towns are on the high-road to Kutch and Gujarat, which has given them from the most remote times a commercial celebrity. Bhinmal is said to contain fifteen hundred houses, and Sanchor about half the number. Very wealthy Mahajans, or ' merchants,' used to reside here, but insecurity both within and without has much injured these cities, the first of which has its name, Mal , from its wealth as a mart. There is a temple of Baraha (Varaha, the incarnation of the hog), with a great sculptured boar. Sanchor possesses also a distinct celebrity from being the cradle of a class of Brahmans called Sanchora, who are the officiating priests of some of the most celebrated temples in these regions, as that of Dwarka, Mathura, Pushkar, Nagar-Parkar, etc. The name of Sanchor is corrupted from Satipura, Sati, or Suttee's town, said to be very ancient.

This Inscription was found in the walled enclosure of of the temple of Nilakantha-Mahadeva about a mile from the city of Bhinmal in the Jaswantpura district of Jodhpur state. It contains 25 lines. Characters are Nagari.

Excepting verse in lines 1-3, the record is in prose. The language is Sanskrit, interspersed with solecisms and provincialisms. With regard to orthography, it is sufficient to say that a consonant is but occasionally doubled in conjunction with a preceding r and that in L.IV dimvasa in used instead of divasa. As regards lexicography, the following words may be noticed : ( 1 ) godhuma pakua, L.11, which seems, I think, to mean a crop of wheat ready for being reaped ; (2) muga in LL.11 and 19, obviously the well-known mung pulse; (3) chosha, i.e. chokha, LL, 11 and 19, a desi word meaning 'rice'; (4) vyasa, LL. 12 and 22, a Brahmana, who recites the Puranas in public; (5) nirvapa, LL. 12 and 19, a dole; and (6) amga-bhoga, unguents to be applied to the body immediately after bathing. Again, abbreviated forms of some words are used. Thus, dra stands for dramma, ka for kalasa, ma for mana, pa, for payala, or payali, and se for sei, For the table of weights still observed in Gadvad, see my remarks on No. X. Kalasia in of course a measure of capacity.

The inscription opens with obeisance to Surya, and then follows a verso in praise of the same deity. The date is afterwards given, which is the 14th of the dark half of Asvina in the [Vikrama] year 1306. The Maharajadhiraja Sri-Udayasimhadeva was tho king and the pancha consisting of the mahamta Gajasimha and others appointed by him was exorcising- local authority at Shrimala (Bhinmal). The object of the inscription is to record two benefactions. One was made by two brothers, the name of the first of whom is gone but that of the second is Mahanasiha. They were both sons of the thakura Udayasiha, and were Mathura Kayaslhas by caste. Forty dramma coins were deposited in the treasury of the god Jagatsvamin, which was the name of the Surya divinity of Bhinmal, as is proved by other inscription and the Srimalapurana. Out of it were to be defrayed the expenses of the divasa-bali and KO forth , m the Uth of the dark half daring the yatra festival of Asvina. As regards tho fixed alawances of provisions for the bali, there was to be wheat 2 sei, and boiled ghee 8 kalasas For naivedya or offering to the god, mung pulse 1 mana, rice (chokha) 2 payalis, and ghee 1/2 kalala wore to be taken. The vyasa and the aboti were to be given each a dole of 1 dramma. The second benefaction was made on the same day for his spiritual merit by one Tathaka, who deposited 15 drammas in the treasury of god Jagatswamin. Out of it the expenses of bali on the fifth of dark half of Magha were to be born. The vyasas, Abottis, Seths are and the members of goshthisare then conjured to look after this arrangement. The prasasti was written by Dhruwa Nagula son of Bahada. This Nagula is no doubt same as the Nagavala, father of Dedaka, who wrote some other published inscriptions of Bhinmal.