Shaubhreya (शौभ्रेय), a warlike tribe, is mentioned by Panini in Ashtadhyayi. [3] 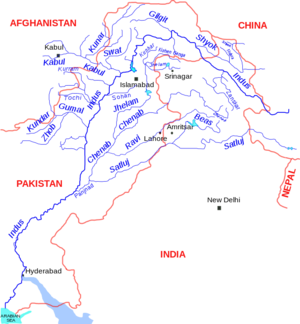 V. S. Agrawala[6] mentions Ayudhjivi Sanghas in the Ganapatha under Yaudheyadi group, repeated twice in the Panini's Ashtadhyayi (IV.1.178) and (V.3.117) which includes - Śaubhreya, probably named after original ancestor Shubhra referred to in Sutra (IV.1.123). The name was possibly connected with the Sabarcae of Curtius, who are named as Sabagrae by Orosius.

After the battle with the Oxydrakai (Kshudrakas) near the old junction of Ravi River with Chenab River, Alexander, marched towards the Subarcae, a powerful Indian tribe where the form of govt was democratic and not regal (Curtius). Their army consisted of 60000 foot and 6000 cavalry attended by 500 chariots. They had elected three generals renowned for their valour and military skill. The above description points to the Sabarcae having been an ayudhajivi Sangha, which the Saubhreyas of Panini were. In this case Greeks particularly noted the form of Govt which was democratic and not regal.

The territory of the Sangha lay on the lower course of the Chenab after it mate the Ravi River. The tribe was settled near the river by which Alexander was returning with his fleet after his battle with Kshudraka-Malavas. Both banks of river were thickly studded with villages.

Alexander Cunningham[7] writes that.... I will now examine the different names of the people who made their submission to Alexander during his halt at the confluence of the Panjab rivers. According to Curtius they were called Sambracae or Sabracae ; 1 according to Orosius Sabagrae ; and according to Diodorus, who placed them to the east of the river, Sambastae. 2 They were a powerful nation, second to none in India for courage and numbers. Their forces consisted of 60,000 foot, 6000 horse, and 500 chariots. The military reputation of the clan suggests the probability that the Greek name may be descriptive of their warlike character, just as Yaudheya means " warrior or soldier." I think, therefore, that the true Greek name may have been Sambagrae, for the Sanskrit Samvagri, that is, the "united warriors," or <greek> which, as they were formed of three allied tribes, would have been an appropriate appellation. In confirmation of this suggestion, I may note the fact that

[p.247]: the country of which Bikaner is now the capital was originally called Bagar-des, or the land of the Bagri, or " Warriors," whose leader was Bagri Rao. 1 Bhati also means " warrior or soldier." We thus find three tribes at the present day, all calling themselves " warriors," who form a large proportion of the population in the countries to the east of the Satlej ; namely, Johiyas or Yaudheyas along the river, Bagris in Bikaner, and Bhatis in Jesalmer. All three are of acknowledged Lunar descent ; and if my suggested interpretation of Sambagri be correct, it is possible that the name might have been applied to these three clans, and not to the three tribes of the Yaudheyas. I think, how-ever, that the Yaudheyas have a superior claim, both on account of their position along the banks of the Satlej, and of their undoubted antiquity. To them I would attribute the foundation of the town of Ajudhan, or Ayodhanam, the " battle-field," which is evidently connected with their own name of Yaudheya, or Ajudhiya, the " warriors." The latter form of the name is most probably preserved in the Ossadii of Arrian, a free people, who tendered their allegiance to Alexander at the confluence of the Panjab rivers. The Ossadii of Arrian would therefore correspond with the Sambastae of Diodorus and the Sambracae of Curtius, who made their submission to Alexander at the same place. Now Ossadioi or Assodioi is as close a rendering of Ajudhiya as could be made in Greek characters. We have thus a double correspondence both of name and

1 This information I obtained at the famous fortress of Bhatner in the Bikaner territory. The name is certainly as old as the time of Jahangir, as Chaplain Terry describes ' Bikaneer ' as the chief city of ' Bakar.' See 'A Voyage to East India,' p. 86.

[p.248]: position in favour of my identification of the Sabagrae or Sambracae with the Johiyas of the present day.

Adi Parva, Mahabharata/Mahabharata Book I Chapter 89 mentions History of Puru and Pandavas (Aila dynasty) and provides us Genealogy of Puru..... "Puru had by his wife Paushti three sons, Pravira, Iswara, and Raudraswa, all of whom were mighty car-warriors. Amongst them, Pravira was the perpetuator of the dynasty. Pravira had by his wife Suraseni a son named Manasyu. And the latter of eyes like lotus-petals had his sway over the whole Earth bounded by the four seas. And Manasyu had for his wife Sauviri. And he begat upon her three sons called Subhru, Sahana, and Vagmi. And they were heroes in battle and mighty car-warriors.

Shalya Parva, Mahabharata/Book IX Chapter 45 mentions List of the mothers who became the companions when Skanda was installed. Shubhru (सुभ्रू) is mentioned in verse (IX.45.8). [9]

Back to Mahabharata People