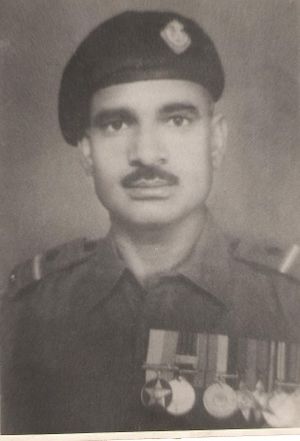 In June 1948 a company of 2 Rajputana Rifles was ordered to dislodge the enemy from the hills overlooking the Rajouri-Thana Mandi Road, in Kashmir.

Havildar Chuna Ram, Commander of the reserve platoon of the company was asked to silence the guns on the spur. The havildar moved up with two sections of his platoon. When they neared the objective, the enemy lobbed hand grenades at them, but, that could not stop Chuna Ram. He charged the enemy post with a sten gun. He killed two and wounded three enemy soldiers and silenced the guns. Then bleeding profusely from his wounds, he fell down, the life ebbing from his body.

Havildar Chuna Ram was awarded Mahavir Chakra for gallantry and leadership of a very high order. [2]

Subedar Chuna Ram Fageria received the following medals for his meritorious service in the Indian Army:

Such a brave hero, about whom army records say unstoppable and large number of awards and medals of bravery to his credit, has no mention in any of records except a website [3] which says Havildar Chuna Ram was awarded Mahavir Chakra posthumously for gallantry and leadership of a very high order.

I contacted Mansukh Ranwa from Sikar who went to his village Dalmas in Sikar district and collected photo and some details. These have been provided here. Munsukh Ranwa has sent me information that the hero Chua Ram died on 31 May 1995 and was cremated like an ordinary person without any army honour entitled by the receipants of MVC.

Back to The Brave People