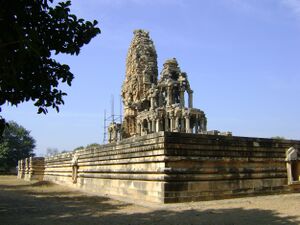 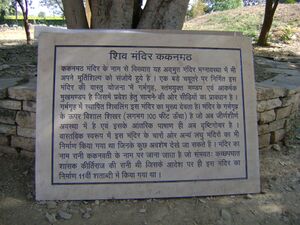 Sihoniya (सिंहौनिया) is an ancient village in tahsil Morena of Morena district in Madhya Pradesh. Its ancient name was - Sinhapani (सिंहपाणी). It is known for an ancient Kakan Math Shiva Temple.

Location of Suhania in Morena district

Kakan Math is two miles away from Sihoniya in the northwest of Morena district, about 35 km. 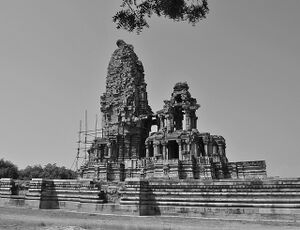 Sihoniya (also Suhoniya) was known to be the capital of the Kushwahas. The Kushwaha kingdom was established in 11th century within 1015 to 1035 AD. The Kachwaha (Kushwaha) king Kirtiraj got a Shiva Temple built in Sihoniya.

This temple is known as the Kakan Math Temple. It stands on a spot two miles away from Sihoniya in the northwest of Morena district, about 35 km. The general belief is that king Kirtiraj had erected the temple to fulfill the wish of Queen Kakanwati. The temple is 115 feet high, built in the Khajuraho style. The local lore also goes that the historical Tomar rulers had built the Kakan Math temple. [1]

Sihoniya is a holy place of the Jains. In the east of the village, there are the ruins of the Jain temples of the 11th century A.D. In these temples there are statues of the Tirthankars such as Shantinath, Kunthnath, Arahanath, Adinath, Parshvnath and others. The main temple has three statues : Shantinath, Kunthnath and Arhanath of 10 to 15 ft. in height. They are of the 11th century A.D.

Alexander Cunningham[2] writes about visit of Bairat by Hwen Thsang. According to Hwen Thsang the capital of the kingdom of Poli-ye-to-lo which M. Reinaud has identified with Paryatra or Bairat, was situated at 500 li, or

[p.338]: 83-2/3 miles, to the west of Mathura, and about 800 li, 133-2/3 miles, to the, south-west of the kingdom of She-to-tu-lo[3] that is, of Satadru, or the Satlej. The bearing and distance from Mathura point unequivocally to Bairath the ancient capital of Matsya as the city of Hwen Thsang's narrative, although it is upwards of 100 miles further to the south of Kullu than is recorded by the pilgrim. But I have already given an explanation of this discrepancy in my account of the intermediate position of Satadru in Northern India.

Abu Rihan, the contemporary of Mahmud, places Narana, the capital of Karzat, at 28 parasangs to the west of Mathura,[4] which, taking the parasang at 3½ miles, would make the distance 98 miles, or 14 miles in excess of the measurement of Hwen Thsang. But as the narratives of the different Muhammadan historians leave no doubt of the identity of Narana, the capital of Karzat, with Narayana the capital of Bairat, this difference in the recorded distance from Mathura, is of little moment. According to Abu Rihan, Narana, or Bazana, was called Narayan,<arabic> by the Musalmans, a name which still exists in Narayanpur, a town situated at 10 miles to the north-east of Bairat itself. From Kanoj to Narana, Abu Rihan gives two distinct routes; the first direct via Mathura being 56 parasangs, or 196 miles, and the other to the south of the Jumna being 88 prasangs, or 308 miles.[5] The inter-mediate stages of the later route are, 1st, Asi, 18 para-

[p.339]: sangs, or 63 miles; 2nd, Sakina, 17 parasangs, or 59½ miles; 3rd, Jandara, 18 parasangs, or 63 miles; 4th, Rajauri, either l5 or 17 parasangs, 54 or 59½ miles, and 5th, Bazana, or Narana, 20 parasaiigs, or 70 miles. As the direction of the first stage is speeially recorded to have been to 'the south-west of Kanoj, it may be at once identified -with the Asai Ghat on the Jumna, 6 miles to the south of Etawa, and about 60 miles to the south-west of Kanoj. The name of the second stage is written ...?... Sahina, for which by the simple shifting of the diacritical points, I propose to read ...?... Suhania, which is the name of a very large and famous ruined town situated 25miles tothe north of Gwalior. Its distance from the Assai Ghat is about 50 miles. The third stage named Jandara by M. Reinaud, and Chandra by Sir Henry Elliot, I take to be Hindon reading ,...?... for...?... distance from Suhaniya by the Khetri Ghat on the Chambal river is about 70 miles. The fourth stage, named Rajori, still exists under the same name, 12 miles to the south-west of Macheri, and about 50 miles to the north-west of Hindon. From thence to Narainpur and Bairat, the road lies altogether through the hills of Alwar or Macheri, which makes it difficult to ascertain the exact distance. By measurements on the lithographed map of eight miles to the inch, I make the distance to be about 60 miles, which is sufficiently near the 20 parasangs, or 70 miles, of Abu Rihan's account.

This pillar was erected by Yashodharman commemorating his victory over the Hunas at Dashapura, (Modern Mandsaur). These are pieces of two Monolithic pillars. These bear inscription which also records the victory of Yashodharman. One of the pillar Capitals has lions seated back to back (C. 6th CAD).[6]