Bahlol Lodi, (Pashto: بهلول لودي), or Bahlul Lodi or Bahlol Lodhi (died 12 July 1489) was chief of the Pashtun Lodi tribe and founder of Lodi Dynasty of the Delhi Sultanate upon the abdication of the last claimant from the previous Sayyid rule. Bahlul became sultan of the dynasty in April 1451. 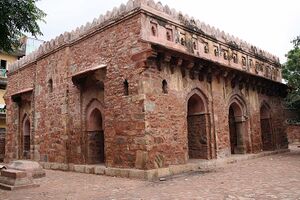 Bahlul's grandfather, Malik Bahram, was a Pashtun from Multan, he took service under the governor of Multan, Malik Mardan Daulat. Malik Bahram had a total of about five sons. His eldest son, Malik Sultan Shah Lodi, later served under the Sayyid Dynasty ruler Khizr Khan and distinguished himself by killing in the battle later's worst enemy, Mallu Iqbal Khan. He was rewarded with the title of Islam Khan and in 1419, appointed the governor of Sirhind. Bahlul, the son of Malik Kala, the younger brother of Malik Sultan was married to Malik Sultan's daughter.

In his youth, Bahlul was involved in the trading of horses and once sold his finely bred horses to the Sayyid dynasty Sultan, Muhammad Shah. As a payment he was granted a pargana and raised to the status of Amir. After the death of Malik Sultan, he became the governor of Sirhind. He was allowed to add Lahore to his charge. Once, Sultan Muhammad Shah asked for his help when the Malwa Sultan Mahmud Shah-I invaded his territory. Bahlul joined the imperial army with 20,000 mounted soldiers. By his cleverness, he was able to project himself as a victor over the army of the Malwa Sultan and Sultan Muhammad Shah conferred on him the title of Khan-i-Khanan. He also accepted Bahlul's occupation over a large part of Punjab.

In 1443, Bahlul attacked Delhi but he did not succeed. During the reign of last Sayyid ruler Sultan Alam Shah, Bahlul again made another unsuccessful attempt to capture Delhi in 1447. Finally, when Alam Shah retired to Badaun in 1448, a minister of Alam Shah, Hamid Khan invited him to occupy the throne of Delhi. After the voluntary abdication of the throne by Alam Shah, Bahlul Shah ascended the throne of Delhi on 19 April 1451 and adopted the title of Bahlul Shah Ghazi. Alam Shah continued to live in Badaun till his death in July 1478.

The tomb of the founder of the Lodi dynasty lies close to the shrine of the noted Sufi saint, Nasiruddin Chirag-e-Delhi, in a locality that goes by his name, 'Chirag Delhi'.