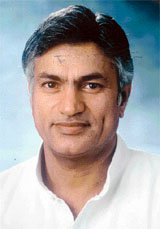 Chaudhary Surender Singh (Legha) (b: July 25, 1946, d: 31 March 2005) was a politician from Haryana. He was son of Chaudhary Bansi Lal and Vidya Devi. Surender is husband of Kiran Choudhry and father of Shruti Chaudary.

He was educated at Chandigarh (Panjab University) where he completed his M.A. and L.L.B.

The short bio data is available at the following link: http://rajyasabha.nic.in/rsnew/pre_member/1952_2003/s.pdf

on 31 March 2005, Surender Singh, aged 59, lost his life, along with noted industrialist Om Prakash Jindal, in a chopper crash during an emergency landing in Saharanpur.