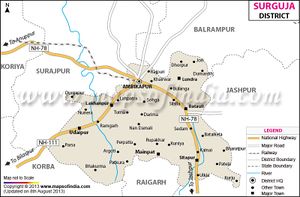 Surguja (सरगुजा) is a town and district in Chhattisgarh. The district headquarters is Ambikapur. 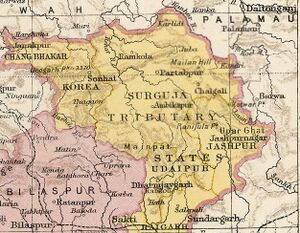 According to legend, Lord Rama had visited Surguja during his 14 years of exile into the forests. There are many places in connection to epic of Ramayana, which are named after Lord Rama, Laxmana and Goddess Sita such as Ramgarh, Sita-Bhengra and Laxmangarh.[1]

Prior to the arrival of the Mauryas, the area was ruled by the Nandas. In the third century BC the region was divided into tiny kingdoms. Later, a Rajput king belonging to the Rakshal clan attacked from what is now Jharkhand, and took control of the area. In 1820, Amar Singh was crowned as Maharaja. During the British Raj period, Surguja State was a princely state.

Languages: Languages spoken include Surgujia, Nagpuri, Bharia, a Dravidian vernacular spoken by at least 200,000 members of the Bharia tribe.[2]