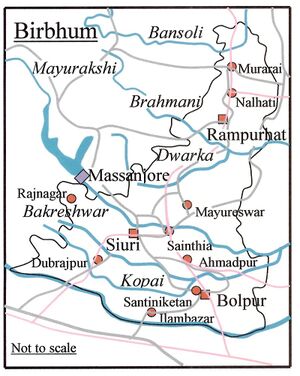 Towns and Rivers in Birbhum district

Suri (also spelt as Siuri and 'Soori'), is the capital of Birbhum district in the Indian state of West Bengal.

Suri is located at 23.9167°N 87.5333°E. It is situated on the extended part of Chhota Nagpur Plateau. Tilpara barrage on Mayurakshi river is located 3 km north-east of Siuri.

The district is well drained by a number of rivers and rivulets running in nearly every case from west to east with a slight southerly inclination. Only two are rivers of any magnitude, viz., the Mor and the Ajay, the latter of which marks the southern boundary, while the Mor runs through Birbhum from West to East. Both rivers are of considerable size when they enter the district, their width varying according to the configuration of the country, from two hundred yards to half a mile. The Ajay first touches the district at its south-west corner, and follows a winding course in an easterly direction, till it enters Burdwan at the extreme south-eastern angle of Birbhum, eventually falling into Bhagirathi near Katwa. The Mor enters Birbhum from the Santhal Paraganas near the village of Haripur and flows through the centre of the district from west to east, passing two miles north of Suri and forming the southern boundary of the Rampurhat Sub-division. It leaves the district a little east of Gunutia and joins Dwarka which itself is a tributary of the Bhagirathi. The Mor is also widely known as Mayurakshi meaning "the peacock eyed", i.e. having water as lustrous as the eye of the peacock.

Between the Mor and Ajay there are a few large streams coming from beyond the western boundary, of which the Hinglo is the most important. It enters the District from the Santhal Paraganas some eight miles north of Ajay, flows through Dubrajpur thana, and gradually approaches that river, unites with it at Chapla, after a course in Birbhum of about 15 miles. Another river is the Bakreswar, which rises at hot spring of same name near Tantipara, some ten miles west of Suri, and after following a zigzag course eastward, and receiving one by one the waters of almost all the rivulets, joins the Mor a few miles beyond the eastern boundary of the district. Other important rivers of the district includes the Brahmani, the Bansloi, the Pagla, the Kopai or Sal. The hills of Massanjore and Dumka can be seen from western part of Suri on a clear day.

Dargah : Suri is famous for Dargah of Hazrat Data Mehboob Shah. Dargah is flocked by thousands of devotees every day.

Kali temple: Some famous temples are situated in Suri. Moumachhi Club has established a Kali temple in Suri, which is unique and grand in this town.

Durga temple of CHATTORAJ family is a very old temple of the town. many gather at this temple on occasions and specially during the Puja.

Back to West Bengal/Jat Villages