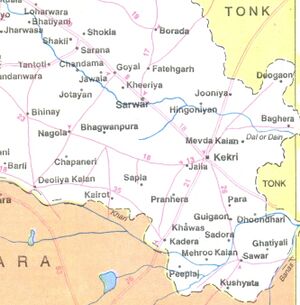 In 1194 A.D. Muhammad Ghori and his generals captured Kanauj, Banaras, Asni and Kaul or Koil. Hariraja tried his luck once more. He sent his general Jaitra towards Delhi while the Muslims were away on their eastern expeditions. "The people were", writes Hasan Nizami, "caught in the darkness of his oppression and turbulence, and the blood and property of the Musulmans fell into danger and destruction." But this state did not last long. The defeat of Jayachandra once again left the Muslims free to employ their full force against the Chauhans. Realising the gravity of the new menace from their side Qutb-ud-din returned to Delhi, and marched against Jaitra, even though it was the middle of the hot season and the Turks and Afghans of the army found it extremely inconvenient to wear their Armour and ride against the enemy. Jaitra fell back upon Ajmer. Here, according to Firishta, Jaitra and his master Hariraja gave battle to the Muslims and were defeated and slain. According to the Hammiramahakavya, however, Hariraja, despairing of putting up any effective resistance, consigned himself to flames, and thereafter the fort fell into the hands of the Muslim ruler. That this is the right version may be seen from the: Taju-l-Ma-Asir, a contemporary source, according to which too Jaitra (and most probably also his master) "sacrificed himself in the flames of a fire" immediately before the fall of the fort [1] Tuntoti mentioned as Tamtuthi (तंतुठी) in the inscription is nearly 20 miles from Ajmer. [2]

Tatoti Inscription of 1194 AD is about death of Rani Pratap Devi of Chauhan ruler Hariraj, younger brother of Prithviraja III.[3]