The Rajas of the Punjab by Lepel H. Griffin/The History of the Minor Phulkian families

The family of Bhadour is the most important of the smaller Phulkian houses, but there are several others who must receive a brief mention here to render the account of the clan complete. 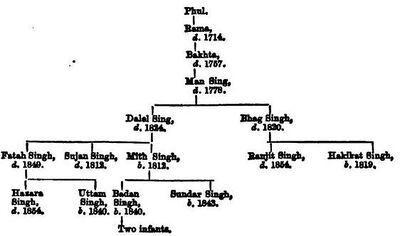 Genealogy of the Minor Phulkian families

The chief of these is Malod descended from Bakhta or Bakht Mal, the fourth son of Chaudhri Rama and brother of Duna and Ala Singh, the founders of the Bhadour and Pattiala houses.

Bakhta, like his brother Ala Singh, left the ancestral village of Bhadour, and founded, eight miles to the eastward, a village which he called after his own name. Nothing further is related of him, but his son Man Singh was a distinguished Chief.

His mother was of the Man - Jat clan ; and a popular

tradition in the Punjab makes all of the Man tribe brave and true. He conquered the district of Malod from the Maler Kotla Afghans in 1754,* and, dying in 1778, left two sons, the elder of whom, Dalel Singh, took the whole estate to the exclusion of his younger brother Bhag Singh, who complained to Raja Sahib Singh of Pattiala and begged his interference in his behalf. Sirdar Chuhr Singh of Bhadour was requested to arrange matters ; and by his arbitration the elder brother took two-thirds and the younger one-third.

Sirdar Dalel Singh was a Bairagi† and employed as his officials, Fakirs, and Muhants.†† He would not allow any one to hunt or shoot in his estate and fined any one convicted of so doing. In 1806, Maharaja Ranjit Singh, who was marching though the country, summoned him, but he sent answer that he was engaged in devotion and could not come. Ranjit Singh, who thought more of earth than heaven, at once seized the Chief's elder son, forced to him to carry a heavy load for a long distance, and would not release him till his father had paid Rs. 22,000 fine.

On the death of Dalel Singh, his two sons divided the estate according to the rule laid down by Chuhr Singh Bhadouria, the elder taking two-thirds, and the younger one-third. The third son, Sujan Singh, died in his father's life time. The same rule of partition was adopted on the death of Bhag Singh.

† The term “Bairagi” is derived from ‘Bairag’ penance, and signifies an ascetic. It is, however, confined to the followers of Vishnu.

Sirdar Uttam Singh of Ramgarh is the present head of the Malod family. He is the second son of Sirdar Fatah Singh, to whose whole share he succeeded on the death of his elder brother Hazara Singh without heirs. He is thirty years of age and is a man of great intelligence. In 1866* he was created a Jagirdar Magistrate in his own estate which is worth Rs. 34,655 per annum.

Sirdar Mith Singh of Malod is the second in rank of this family. He, with his brother Fatah Singh, did good service during the war of 1845-46, supplying 50 sowars, and fought himself at Mudki and Firushahr. In 1857 he showed conspicuous loyalty, being always ready with men and money, and received, as a reward, the remission of a year's commutation money, while ¼ th of the whole sum was for ever excused. He is regarded with great esteem by all who know his character and services.

The younger branch of the Malod family has Only one representative, Sirdar Hakikat Singh of Ber. On the death of his brother Ranjit Singh he succeeded to the Ber estate, having before held only that of Chime. He is an Honorary Magistrate, and did good service in 1857.

The Badrukhan family - The Badrukhan family ranks next among the Phulkians, after Bhadour and Malod. The principal part of the history of this family is given with that of Jhind, of which it was a branch, Sirdar Bhup Singh, the founder, being the son of Raja Gajpat Singh and the brother of Raja Bhag Singh of Jhind. He received his separate

estate in 1789, from which time he was always considered independent of Jhind. However, in 1834, the Jhind line being extinct on the death of Raja Sangat Singh, Raja Sarup Singh, the grandson of Sirdar Bhup Singh, was allowed by the British Government to succeed, and became the father of the present Raja of Jhind. Basawa Singh, the uncle of Raja Sarup Singh, was the first Chief of Badrukhan, his father having held this estate and that of Bazidpur ; and the Phulkian Chiefs assigning Badrukhan and Bamman Bade, the more valuable portion, to the younger son, since he has been obedient to his father while Raja Karam Singh, the elder, had openly rebelled against him.

Sukha Singh, the elder son of Basawa Singh, who died in 1830, claimed the Jhind Chiefship on the death of Raja Sangat Singh, on the ground that the custom of the Jhind house was for the estate to devolve on the second son, and also that his brother Raja Karam Singh had been disinherited for his disobedience, but these claims were disallowed by the British Government Badrukhau genealogy is as follows: 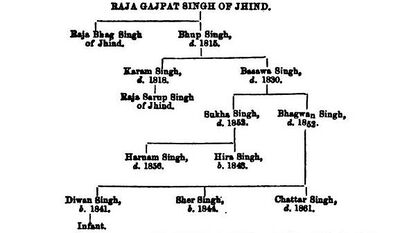 On the death of Sukha Singh, his estate was equally divided between his two sons, but on the death of Harnam Singh in 1856, Hira Singh, the younger, succeeded to the whole. Diwan Singh is the representative of the younger branch of the family. The jurisdiction over the village of Badrukhan was transferred, in 1861, to Jhind.

The Phulkian Chiefs who are entitled to seats in Vice-Regal Durbars :

Those of the Phulkian family who have, at this day rank and position, have now been mentioned. Eleven of the descendants of Phul are entitled to attend the Durbars of the Viceroy, namely : —

Several other families of the Phulkian stock:

There are several other families of the Phulkian stock who are of no political or historical importance, who count no Sirdars among their number, and who are not entitled to be present at any Durbar. But the

:* In the Viceregal Durbar of 1864, Ishar Singh, the representative of the elder branch, took Kehr Singh’s place, but he died two years later, and that branch is now extinct.

only difference between them and the great Chiefs is in wealth and power ; all the Phulkians are presumed to be socially equal and their daughters marry into the families of Pattiala, Jhind, and Nabha.

These poor relations of the great houses form five families : two descended direct from Phul the common ancestor ; one an offshoot from the Jhind, and the two last offshoots from the Bhadour stock.

The Sikhs of Jiundan: First are the Sikhs of Jiundan and Bhagrawal, thirty-two in number, and owning land worth Rs. 2,079 a year. They, descend from Rughu, the third son of Chaudhri Phul, by his first wife Bali. He married in the village of Jiundan, the daughter of ' Malkher Bullar’ and seems to have had no more distinguished profession than highway robbery. When he became too blind to follow this occupation, he settled in his wife's village of Jiundan, where he died in 1717.

When Pattiala made specific claims to certain Bhadour villages after the general question of jurisdiction had been settled, a separate discussion arose regarding the village of Jiundan. Pattiala asserted that Rughu was killed in a fight with the Burars, and that his widow and children came to settle in her father's village [[Jiundan, the Pattiala Raja looking after her interests, bringing up her sons, and still, in 1855, exacting service from their descendants.

Nabha also claimed the village, stating that it was close to her village of Phul, and should be under her authority. Jiundan was situated about 8 miles south east of Phul, surrounded on three sides by Nabha villages, while British territory bounded it on the north. The jurisdiction evidently belonged to the British Government, for Rughu lived before

Pattiala became a State at all ; and, though of the Phulkian clan, there was no reason that his descendants should be considered Pattiala feudatories, rather than any other branch of the Phulkian family. The claim was accordingly disallowed, but permission was given to Pattiala to take Jiundan in lieu of the village of Ramanah, which had been assigned to that State on the ground of its being a grant to Ramdat, the father of one of Raja Amar Singh's wives.*

Of the four sons of Rughu, the only one who left issue was Hardas Singh, the ancestor of the present Jiundan Sikhs.

The Gumti Sikhs or Laudgharias

The Gumti Sikhs or Laudgharias: Second in order come the Gumti Sikhs, or, as they are commonly known, the Laudgharias," a term signifying the 'younger branch.' These are the descendants of Phul by his second wife, Rajji, who bore him three sons, Channu, Jhandu and Takht Mal. Jhandu died issue-less ; Channu had two sons, earned Kilas and Masur, and his brother Takht Mal had five, namely, Bir, Lakmir, Bhumia, Dalloh and Bakhta. These founded the village of Gumti, ten miles north of Phul, and half way between Dialpur and Bhai Rupa, dividing it into seven shares, which are now held by their respective descendants. The Gumti Sikhs, being weak, attached themselves to whomsoever they thought best able to defend them. Sirdar Chuhr Singh of Bhadour helped them against the Maharajkian Sikhs ; and they later accepted the protection of Raja Jaswant Singh of Nabha, to whom they are still bound to furnish 14

Third among the zamindari Phulkian families is that of Dialpura or Mirza-ka-Dialpura. The founder of this branch was Bulaki Singh, the third son of Sukhchen, and younger brother of Raja Gajpat Singh of Jhind. He first married, at Kot Kapura, Taran, a girl of a Nehre Sanduan family, who bore him a son named Mirza. His second wife, Malan, was the widow of his eldest brother Alam Singh. She was the mother of Jitu. Bulaki Singh died about the year 1785. The village of Dialpura was founded by Mirza, but both the brothers lived there, and their descendants, fifty-one in number, share it among them. The estate is worth Rs. 4,000 a year.

The Rampura family is fourth on the list. It comprises 70 members, descended from Suma or Suma Singh, the fifth and younger son of Chaudhri Duna of Bhadour. Suma married three wives, who bore him five sons, Jassa Singh, Massa Singh, Tek Singh, Charat Singh, and Budh Singh. The eldest Jassa Singh died childless, and from the other four have descended the Sikhs of Rampura and Kotla Koura, the former founded by Chaudhri Rama, and the latter by his son Bakhta. These villages, worth Rs. 6,500 a year, they hold in proprietary right.

The Sikhs of Kot Duna

Last of the zemindar Phulkian families, are the Sikhs of Kot Duna, a small branch consisting of only six members. It has descended from Dal Singh, the youngest brother of Sirdar Chuhr Singh of Bhadour. 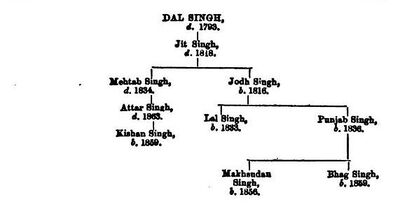 Genealogy of Sikhs of Kot Duna

Dal Singh owned three villages, Kot Duna, Bugar and Man Mibarian. He perished with his half-brother Chuhr Singh Bhadouria in 1793, when their enemy Sajjan of Ghanne set fire to the house in which they were sleeping. Jit Singh, his son, died of hard drinking in 1818, and the estate was divided between his sons. Of the elder branch, Kishan Singh, a child of eleven years, alone survives. His grandfather and father died at the early age of 32 and 31 respectively, having shortened their lives by their excesses. Jodh Singh enjoys the other half of the jagir, which is worth Rs. 5,826 a year. The village of Kot Duna is in Pattiala territory, about eleven miles to the south of Dhanowra.

End of chapter:The History of the Minor Phulkian families
Go to Index of the Book
Retrieved from "http://www.jatland.com/w/index.php?title=The_Rajas_of_the_Punjab_by_Lepel_H._Griffin/The_History_of_the_Minor_Phulkian_families&oldid=311756"
Categories: