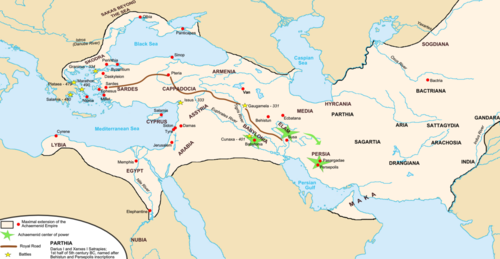 Urartu ( Hebrew:Ararat) was an Iron Age kingdom centred on Lake Van in the Armenian Highlands.

The landscape corresponds to the mountainous plateau between Asia Minor, Mesopotamia, and the Caucasus mountains, later known as the Armenian Highlands. The kingdom rose to power in the mid-9th century BC, but was conquered by Media in the early 6th century BC. The heirs of Urartu are the Armenians and their successive kingdoms.

Assyrian inscriptions of Shalmaneser I (c. 1274 BC) first mention Uruartri as one of the states of Nairi – a loose confederation of small kingdoms and tribal states in Armenian Highland in the 13th to 11th centuries BC which he conquered. Uruartri itself was in the region around Lake Van. The Nairi states were repeatedly subjected to further attacks and invasions by the Assyrians, especially under Tukulti-Ninurta I (c. 1240 BC), Tiglath-Pileser I (c. 1100 BC), Ashur-bel-kala (c. 1070 BC), Adad-nirari II (c. 900), Tukulti-Ninurta II (c. 890), and Ashurnasirpal II (883–859 BC).

Urartu re-emerged in Assyrian inscriptions in the 9th century BC as a powerful northern rival of Assyria. The Nairi states and tribes became a unified kingdom under king Aramu (c. 860 – 843 BC), whose capital at Arzashkun was captured by the Assyrians under Shalmaneser III. Roughly contemporaries of the Uruartri, living just to the west along the southern shore of the Black Sea, were the Kaskas known from Hittite sources.

According to Urartian epigraphy, Sarduri III was followed by three kings—Erimena (635–620 BC), his son Rusa III (620–609 BC), and the latter's son Rusa IV (609–590 or 585 BC). Late during the 600s BC (during or after Sardur III's reign), Urartu was invaded by Scythians and their allies—the Medes. In 612 BC, the Median king Cyaxares the Great together with Nabopolassar of Babylon and the Scythians conquered Assyria after it had been badly weakened by civil war. Many Urartian ruins of the period show evidence of destruction by fire. This would indicate two scenarios—either Media subsequently conquered Urartu, bringing about its subsequent demise, or Urartu maintained its independence and power, going through a mere dynastic change, as a local Armenian dynasty (later to be called the Orontids) overthrew the ruling family with the help of the Median army. Ancient sources support the latter version: Xenophon, for example, states that Armenia, ruled by an Orontid king, was not conquered until the reign of Median king Astyages (585– 550 BC) – long after Median invasion of the late 7th century BC.[1] Similarly, Strabo (1st century BC – 1st century AD) wrote that "[i]n ancient times Greater Armenia ruled the whole of Asia, after it broke up the empire of the Syrians, but later, in the time of Astyages, it was deprived of that great authority ..." [2]

According to the Encyclopedia of Indo-European Culture:

The Armenians according to Diakonoff, are then an amalgam of the Hurrian (and Urartians), Luvians and the Proto-Armenian Mushki who carried their IE language eastwards across Anatolia. After arriving in its historical territory, Proto-Armenian would appear to have undergone massive influence on part the languages it eventually replaced. Armenian phonology, for instance, appears to have been greatly affected by Urartian, which may suggest a long period of bilingualism.[3]