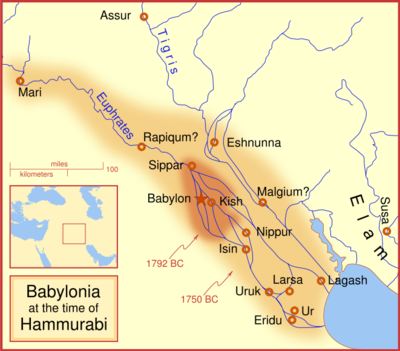 Uruk is eponymous of the Uruk period, the protohistoric Chalcolithic to Early Bronze Age period in the history of Mesopotamia spanning c. 4000 to 3100 BC, succeeded by the Jemdet Nasr period of Sumer proper. Uruk played a leading role in the early urbanization of Sumer in the mid 4th millennium BC. At its height c 2900 BC, Uruk probably had 50,000–80,000 residents living in 6 km2 of walled area; making it the largest city in the world at the time.[Harmansah, 2007] The semi-mythical king Gilgamesh, according to the chronology presented in the Sumerian king list, ruled Uruk in the 27th century BC. The city lost its prime importance around 2000 BC, in the context of the struggle of Babylonia with Elam, but it remained inhabited throughout the Seleucid and Parthian periods until it was finally abandoned during the Sassanid period shortly before the Islamic conquest of Mesopotamia. The site of Uruk was discovered in 1849 by William Kennett Loftus who led the first excavations from 1850 to 1854. The Arabic name of lower Mesopotamia, al-ʿIrāq, is thought to be derived from the name Uruk, possibly via Middle Persian transmission, and gave rise to the name of modern Iraq.[1]

When the Seleucid Empire was annexed by the Parthians in 141 BC, Uruk again entered a period of decline from which it never recovered. The decline of Uruk may have been in part caused by a shift in the Euphrates River. By 300 AD, Uruk was mostly abandoned, and by c. 700 AD it was completely abandoned.

The Mask of Warka, also known as the 'Lady of Uruk' and the 'Sumerian Mona Lisa', dating from 3100 BC, is one of the earliest representations of the human face. The carved marble female face is probably a depiction of Inanna.

Word Uruka (उरुक) finds mention in verse-45 (L-30) of English translation of Harsha Inscription of 961 AD. (गंगेश्वरभवने का चंडिकथ उरुक सुतेन भक्तेन) It tells that in the house of the Lord of Ganga, what glorious easy-flowing praise, interspersed with the histories of his consort Chandi, was uttered by the prince of learned men, the religious son of Uruka !

What does Uruka stand for in this verse ? No historian has explained about this fact.

Bhim Singh Dahiya has mentioned while discussing the Manda empire that archaeological findings show that the name of these people was Manda. It were the Mandas who seem to be included in the term Umman-Mandas. We find that their last king was overthrown by Utukhegal, the Vrik. These Vrikas were known, at that period as Warkas or Uruks and they now form an important clan of the Jats. (See - Jats the Ancient Rulers (A clan study)/The Antiquity of the Jats, p.295)

Bhim Singh Dahiya discussing the clan of Harshavardhana writes: Our conclusion, therefore, is that Harshavardhana was from the Varika clan and not from Bains clan as Cunningham and Carlleyle make out. (See - Jats the Ancient Rulers (A clan study)/Harsha Vardhana : Linkage and Identity, p.212).

This indicates that the Harshadeva mentioned as kuladeva of the Chauhans in verse 27 of the inscription (श्री हर्षकुलदेवोस्या स्तस्मात् दिव्य कुल क्रम: ॥ २७) is probably the Harshavardhana, a Virk Jat. Harshavardhana is also known as Harsha Deva.

Uruk (उरुक) is also considered at times to be a variant of Uluk (Ulūka:उलूक), Son of Kitava, who was king of a country and people of the same name in Mahabharata. He was an ally of the Kauravas, and acted as their envoy to the Pandavas. He has been mentioned in various Parvas of Mahabharata. This relates to the history of Aulakh or Ola.