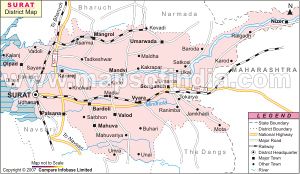 Vaḍari or Eder was one of Buddhist places visited by Xuanzang in 640 AD. Alexander Cunningham[1] has identified Vadari with Surat in the state of Gujarat.

Alexander Cunningham[2] writes that On leaving Malwa, Hwen Thsang travelled first to the south-west to the " confluence of two seas," and then turning to the north-west reached O-cha-li, or Vadari,[3] the whole distance being between 2400 and 2500 li, or between 400 and 417 miles. By the term " confluence of two seas," I understand the meeting of the waters of the southern and western seas in the Gulf of Khambay. The town of Surat, or the ancient Surparaka (सुर्पारक) near the mouth of the Tapti, may be considered as the entrance of the gulf ; and as it lies to the south-west of Dhar, it was probably this point that was first visited by Hwen Thsang. The distance is just 200 miles. Prom Surat to Eder the distance is the same, but the direction is to the east of north ; I would, therefore, read north-east instead of north-west, and the position of Eder will then correspond sufficiently well with that of Hwen Thsang's O-cha-li or Vadari. I am ignorant of the Sanskrit name of Eder, but it seems highly probable that the city of Badari mentioned in the Basantgarh inscription[4] is the same place. In the

[p.495]: middle of the eleventh century Vadari was the capital of a chiefship in the neighbourhood of Vadapura or Barnagar, which lies 30 miles to the westward of Eder, and on the opposite side of the Sabarmati river. The Royal family claimed descent from Raja Bhava-Gupta, "who was a great warrior and the illuminator of his line." This Bhava or Bhaba I believe to be the same as the Bav or Bappa of the Sisodiya annalists of Udaypur, whose immediate predecessors for several generations were the Rajas of Eder. As Bappa lived in the beginning of the eighth century, the date of his predecessors, the Rajas of Eder, agrees exactly with the period of Hwen Thsang's visit. For these reasons I think that there are fair grounds for the identiflcation of Eder with the Vadari of the inscription, as well as with the Otali, or Vadari, of the Chinese pilgrim.

The size of the province is estimated at 6000 li, or 1000 miles, in circuit. This large extent shows that Atali or Vadari must have comprised the whole of the unassigned tract of country lying between Vairat on the north, Gurjjara on the west, Ujain on the east, and Malwa on the south. Its boundaries, therefore, must have been Ajmer and Ranthambhor to the north, the Loni and Chambal rivers on the east and west, and the Malwa frontier on the south, from the mouth of the Banas river in the Ran of Kachh to the Chambal near Mandisor. The circuit of these limits is about 900 miles measured on the map, or 1000 miles by road distance. ;

In Pliny's account of the different nations to the eastward of the Lower Indus I find the following passage, which would seem to apply to Eder and the surrounding districts.[5] "Next the Nareae, who are bounded

[p.496]: by Capitalia, the loftiest mountain of India, on the other side of which the people dig up much gold and silver. Beyond them are the Oraturae (or Oratae), whose king has only ten elephants, but a large force of infantry, (and) the Varetatae (or Suaratatatae), whose king has no elephants, but a strong force of horse and foot. (Then) the Odombaerae etc. The last nation has already been identified with the people of Kachh, and the high mountain of Capitalia can only be the holy Arbuda, or Mount Abu, which rises to more than 5000 feet above the sea. The Nareae must therefore , be the people of Sarui, or the " country of reeds," as I nar and sar are synonymous terms for a " reed." The country of Sarui is still famous for its reed arrows.

The Oraturae I would identify with the people of Vadapura or Barpur, which is the same name as Barnagar. By reading π instead of τ in the Greek original of Oratura, the name will become Orapura, which is the same as Barpur, or Vadapura. The last name in Pliny's list is Varetatae which I would change to Vataretae, by the transposition of two letters. This spelling is countenanced by the termination of the various reading of Suaratarata, which is found in some editions. It is quite possible however, that the Suarataratae may be intended for the Surashtras. The famous Varaha Mihira mentions the Surashtras and Badaras together, amongst the people of the south-west of India.[6] These Badaras must therefore be the people of Badari, or Vadari.

I understand the name of Vadari to denote a district abounding in the Badari, or Ber-tree (Jujube), which is very common in southern Rajputana. For the same

[p.497]:reason I should look to this neighbourhood for the ancient Sauvira, which I take to be the true form of the famous Sophir, or Ophir, as Sauvira is only an-other name of the Vadari, or ber-tree, as well as of its juicy fruit. Now, Sofir is the Coptic name of India at the present day ; but the name must have belonged originally to that part of the Indian coast which was frequented by the merchants of the West. There can be little doubt, I think, that this was in the Gulf of Khambay, which from time immemorial has been the chief seat of Indian trade with the West. During the whole period of Greek history this trade was almost monopolized by the famous city of Barygaza, or Bharoch, at the mouth of the Narbada river. About the fourth century some portion of it was diverted to the new capital of Balabhi, in the peninsula of Gujarat ; in the middle ages it was shared with Khambay at the head of the gulf, and in modern times with Surat, at the mouth of the Tapti.

If the name of Sauvira was derived, as I suppose, from the prevalence of the Ber-tree, it is probable that it was only another appellation for the province of Badari, or Eder, at the head of the Gulf of Khambay. This, indeed, is the very position in which we should expect to find it, according to the ancient inscription of Rudra Daman, which mentions Sindhu-Sauvira immediately after Surashtra and Bharukachha, and just before Kukura, Aparanta, and Nishada[7] According to this arrangement, Sauvira must have been to the north of Surashtra and Bharoch, and to the south of Nishada, or just where I have placed it, in the neighbourhood of Mount Abu. Much the same

[p.498]: locality is assigned to Sauvira in the Vishnu Purana : "in the extreme west are the Saurashtras, Suras, Abhiras, Arbudas ; the Karushas and Malavas dwelling along the Paripatra mountains ; the Sauviras, the Saindhavas, the Hunas, the Salwas, the people of Sakala, the Madras, etc."[8] In this enumeration we find mention of nearly every known district lying around Vadari, or Eder, on the east, west, north, and south. But there is no notice of Vadari itself, nor of Kheda, nor of Khambay, nor of Analwara, from which I infer that Sauvira most probably included the whole of these places. Vadari, or Sauvira, was therefore equivalent to southern Rajputana.

In the Septuagint translation of the Bible, the Hebrew Ophir is always rendered by Sophir. This spelling was perhaps adopted in deference to the Egyptian or Coptic name of Sofir. The earliest mention of the name is in the Book of Job, where the "gold of Ophir" is referred to as of the finest quality.[9] At a later date the ships of Huram, king of Tyre. " went with the servants of Solomon to Ophir, and took thence 450 talents of gold, and brought them to King Solomon."[10] The gold of Ophir is next referred to by Isaiah, who says, " I will make a man more precious than gold, even a man than the golden wedge of Ophir."[11] The word here translated ' wedge ' means a ' tongue, or ingot ;' and I infer that the wedge of gold of 50 shekels weight that was concealed by Achan,[12] was most probably one of the ingots of Ophir.

[p.499]: It now remains to show that the district of Vadari, or Eder, which I have suggested as the most probable representative of Ophir, has been, and still is one of the gold producing countries of the world. The evidence on this point, though meagre, is quite clear. The only ancient testimony which I can produce is that of Pliny, who describes the people dwelling on the other side of mount Capitalia (or Abu), as possessing " extensive mines of gold and silver."[13] At the present day the Aravali range is the only part of India in which silver is found in any quantity, while the beds of its torrents still produce gold, of which many fine specimens may be seen in the India museum.

But if the Gulf of Khambay was the great emporium of Indian trade with the West, it is not necessary that the gold for which it was famous should have been produced in the district itself. At the present day, Bombay, which is on the same western coast, exports the produce of two inland districts, the opium of Malwa and the cotton of Berar. Wherever the emporium of commerce may have been, to that point the gold of India would have flowed naturally, in exchange for the commodities of the West.