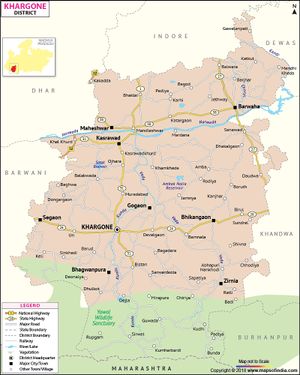 Khargone is a town and district in Madhya Pradesh.

In ancient period, the Haihayas of Mahishmati (present-day Maheshwar) ruled this region.

In early medieval age, the area was under the Paramaras of Malwa and the Ahirs of Asirgarh.

In late medieval age, the area was under Malwa Sultanate of Mandu.

In 1531, Gujarat sultan Bahadur Shah brought this area under his control. In 1562, Akbar annexed this territory along with the whole Malwa to Mughal empire.

In 1740 Marathas under the Peshwa brought the area under their control. In 1778, Peshwa distributed this territory to the Maratha rulers, Holkars of Indore, Sindhias of Gwalior and Ponwars of Dhar.

After the independence and merger of the Princely states with Union of India in 1948, this territory became West Nimar district of Madhya Bharat. Khargone district had been part of the Nerbudda (Narmada) Division of the Central Provinces and Berar, which became the state of Madhya Bharat (later Madhya Pradesh) after India's independence in 1947.[1]

On 1 November 1956 this district became part of the newly formed state of Madhya Pradesh. On 25 May 1998 West Nimar district was bifurcated into two districts: Khargone and Barwani.