World War-I (WW-I or WW1), also known as the First World War, or the Great War, was a global war originating in Europe that lasted from 28 July 1914 to 11 November 1918. More than 70 million military personnel, including 60 million Europeans, were mobilised in one of the largest wars in history. Over nine million combatants and seven million civilians died as a result of the war (including the victims of a number of genocides), a casualty rate exacerbated by the belligerents' technological and industrial sophistication, and the tactical stalemate caused by gruelling trench warfare. It was one of the deadliest conflicts in history, and paved the way for major political changes, including revolutions in many of the nations involved.

Role of Indian soldiers during WW-I 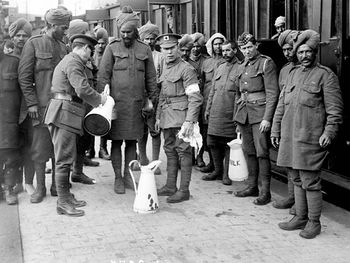 Indian soldiers in transit pass through a Paris Getty in 1915

Germany attempted to use Indian nationalism and pan-Islamism to its advantage. She tried instigating uprisings in India, and sent a mission to Afghanistan urging her to join the war on the side of Central powers. However, contrary to British fears of a revolt in India, the outbreak of the war saw an unprecedented outpouring of loyalty and goodwill towards Britain. Indian political leaders from the Indian National Congress and other groups were eager to support the British war effort, since they believed that strong support for the war effort would further the cause of Indian Home Rule. The Indian Army in fact outnumbered the British Army at the beginning of the war; about 1.3 million Indian soldiers and labourers served in Europe, Africa, and the Middle East, while the central government and the princely states sent large supplies of food, money, and ammunition. In all, 140,000 men served on the Western Front and nearly 700,000 in the Middle East. Casualties of Indian soldiers totalled 47,746 killed and 65,126 wounded during World War I. The suffering engendered by the war, as well as the failure of the British government to grant self-government to India after the end of hostilities, bred disillusionment and fuelled the campaign for full independence.[1]

A new book, For King and Another Country: Indian Soldiers on the Western Front 1914-18 by Shrabani Basu, recounts for the first time some of the personal stories of the Hindus, Sikhs and Muslims from India who fought alongside the British and other allies in the conflict. For 12 months between 1914 and 1915, the British Indian Army fought on one of the bloodiest stretches of the Western Front.

But despite contributing the largest volunteer army from Britain’s imperial dominions at a cost of some 70,000 lives, there is concern that the sacrifice of the fighters from pre-partition India has been allowed to slip between the cracks of the post-colonial history of both countries.

Basu, a historian, told "The Independent" newspaper in London -

“Few people are aware that 1.5 million Indians fought alongside the British – that there were men in turbans in the same trenches as the Tommies … They have been largely forgotten, both by Britain and India.

“The soldiers who had fought for their colonial masters were no longer worthy of commemoration in post-independence India. There is no equivalent of Anzac Day. In order to sustain the Indian troops in the alien environment of northern France, a remarkable logistical operation was put in place, which included the setting up of separate kitchens to meet the dietary requirements of Muslims and Hindus. In many cases, cooking was carried out close to the front lines to allow curries to be supplied to the soldiers, at the cost of the lives of many orderlies killed by artillery as they ferried the hot food to the trenches.

But the heavy death toll was also exacerbated by acts of negligence. The Indian regiments were sent to Europe in their tropical cotton drill; winter kit, including greatcoats, did not arrive before dozens had perished from cold and frostbite.

The racist attitudes of the era also enflamed tensions. Wounded Indian soldiers being cared for in hospitals in places such as Brighton were not allowed to receive direct care from English nurses, and recuperating troops were also kept under armed guard in locked camps.

One injured private or “sepoy” felt sufficiently aggrieved to write a letter directly to King George V. “The Indians have given their lives for 11 rupees,” he wrote. “Any man who comes here wounded is returned thrice and four times to the trenches. Only that man goes to India who has lost an arm or a leg or an eye.”

Eventually, Britain’s generals recognised that the Western Front was not the best place to deploy its Indian troops and instead, sent them into battle in locations from Mesopotamia to Gallipoli, where they again fought valiantly.

In the 1920s. a large memorial to India’s First World War dead was built in northern France at Neuve Chapelle, but until this month there has been little to mark their sacrifice on British soil.

“Time has now healed some of those wounds and we can look with fresh eyes at the historic contribution of Sikhs, Hindus and Muslims. It is very important because it also helps British Asians to understand and feel part of Britain.”

As Basu’s book makes clear, the men fighting in Flanders were under no illusions about the nature of the conflict into which they had been thrust. A poem by one Sikh soldier reads: “The cannon roar like thunder, the bullets fall like rain/ And only the hurt, the maimed and blind will ever see home again.”[2]

Despite discrimination by British officers, many soldiers from Indian forces received prestigious Victoria Cross medal while fighting during WW-I. Among them, the names of Jat recipients - Risaldar Major Jag Ram and Risaldar Badlu Singh - are worth mentioning. 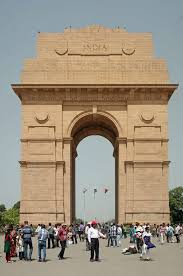 What is known today as India Gate, was firstly named All India War Memorial, the construction of which was started in 1921, after the end of World War-I. The monument was completed in 1931.

The influence of this monument dates you back to the WW-I in which the British soldiers as well as Indian soldiers lost their lives. This also includes the Afghan fight. It is considered to venerate those soldiers who were special for Mother India as they ended up their lives in order to protect their motherland. On first notion, the Gate was called by the name of All India War Memorial but later, it became popular by the name India Gate because on all four sides of the monument, the word INDIA is inscribed and prominently visible from a distance.

Throughout India, India Gate is one of the biggest memorials of war.