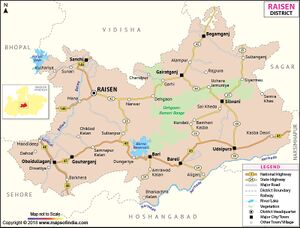 Andher Stupas are a group of three stupa located 19 km south-east of Sanchi, Raisen District, Madhya Pradesh, India. Located high enough, they overlook the Bhojpur Stupas, beyond which are visible the stupas of Sanchi.

Stupa No.1 can be dated to about 150 BCE.[1] It is the largest of the three stupas, and it has the remains of a barrier of stone surrounding it (Vedika or "railing").[2] 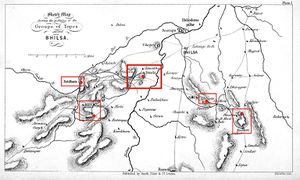 There are in all four groups of Buddhist stupas surrounding Sanchi within a radius of twenty kilometers: Bhojpur and Andher in the southeast, Sunari to the southwest, and Satdhara to the west.[4] Further south, about 100 km away, is Saru Maru.

All these stupas were searched by Major Cunningham, who most of the time took the relics found in the center of the stupas to England. He donated them to the British Museum and the Victoria and Albert Museum.[5]