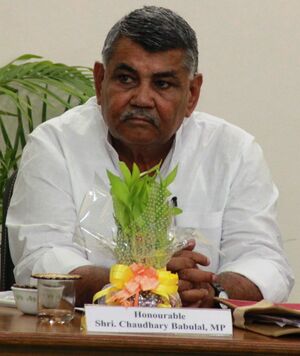 Chaudhary Babulal (Nohwar) is the incumbent Member of Parliament of the Bharatiya Janata Party (BJP) from Fatehpur Sikri (Lok Sabha constituency), Agra. He is one of prominent Jat leader of Western Uttar Pradesh and represent as a MP (BJP) in 16th Lok Sabha.

He basically belongs to village Panwari of Agra district.

Chaudhary Babulal Ji was born on 2 July, 1948 in a small village of Panwari, of Achhnera block of the Agra district. His father Shri Raghunath Singh was a farmer and mother Kiran Devi, a house wife. His early education was done at Raja Balwant Singh (RBS) College, Agra till Intermediate (12th) level. He was married to Mahaviri Devi and they have five sons and one daughter. The elder most son, Rameshwar Chaudhary Singh, has twice contested in the Lok Sabha elections; for Agra in 1998 and then Mathura in 1999. He placed second in both elections with 1.90 lakh and 2 lakh votes respectively. He now runs ancestral agriculture and two degree colleges.

Chaudhary Babulal Ji is presently member of 16th Lok Sabha as MP to the constituency of Fatehpur Sikri, Agra. Earlier, he had successfully been selected for two occasions as MLA to Legislative Assembly Elections of UP Government.