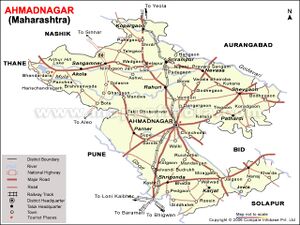 Daimabad is a deserted village and an archaeological site of Indus Valley Civilization on the left bank of the Pravara River, a tributary of the Godavari River in Srirampur taluka in Ahmednagar district of Maharashtra state in India.

Located in Srirampur taluka in Ahmednagar district of Maharashtra.

This site was discovered by B. P. Bopardikar in 1958. It has been excavated three times so far by the Archaeological Survey of India teams. The first excavation in 1958-9 was carried out under the direction of M. N. Deshpande. The second excavation in 1974-5 was led by S. R. Rao. Finally, the excavations between 1975-6 and 1978-9 were carried out under the direction of S. A. Sali.[1] Discoveries at Daimabad suggest that Late Harappan culture extended into the Deccan Plateau in India.[2]Daimabad is famous for the recovery of many bronze goods, some of which were influenced by the Harappan culture.[3]