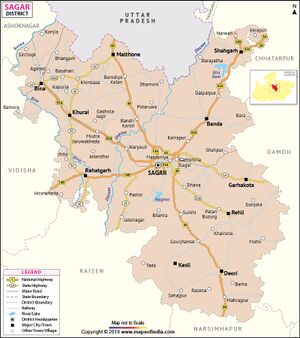 Deori (देवरी) is a village and tahsil in Sagar district, of Madhya Pradesh.

Deori is a historical city situated on the banks of river Sukhchain, on the Narsinghpur Sagar road. Deori is located at 21.40°N 79.02°E. It has an average elevation of 360 metres.

In the 17th century, King Chandela founded this city. Earlier it was known as Ramgarh or Ujargarh. Later on a temple was constructed at this place, after which the city was renamed as ‘Deori’, meaning the ‘Abode of God’.

It is famous as "Panch Mahlon Ki Rajdhani" in the historical area. A Fort of ancient rule time is situated at the center of city. The oldest temple is in the city. The historical items are constructed at the surrounding area of this temple.

The Deori city had a unique role during the independence movement and once visited by Mahatma Gandhi. The "Nauradehi" sanntury is near the Deori. Its total area is 103.62 square kilo meter (Approx). Sambhar, Cheetal, Krishnamriga and Neelgay are found in this sanntury. The Gopalpura forest is very near from Deori. The Gopalpura is known by the name of 'Sagon' (Teak) and 'Tendu' Forest.