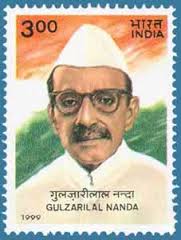 Gulzarilal Nanda (गुलजारीलाल नन्दा) (4 July 1898 – 15 January 1998) was the caretaker Prime Minister of India for two short periods following the deaths of Jawaharlal Nehru in May 1964 and Lal Bahadur Shastri, in January 1966. Both his terms ended after the ruling Indian National Congress's parliamentary party elected a new prime minister.

Gulzarilal Nanda was born on 4 July 1898 in Sialkot. He received his education in Lahore, Amritsar, Agra, and Allahabad.

Nanda worked as a research scholar on labour problems at Allahabad University (1920–1921), and became a Professor of Economics at National College in Bombay in 1921. In 1922, he became secretary of the Ahmedabad Textile Labour Association where he worked until 1946. He was imprisoned for Satyagraha in 1932, and again from 1942 to 1944.

After Independence of India in 1947, Nanda won Lok Sabha elections in 1952, 1957 and 1962 from Sabarkantha in Gujarat and later, also two times from Kaithal, in Haryana.

During this period, he was a Union Minister in various Ministries, including, Labour, Planning, Irrigation & Power, and Home Affairs. 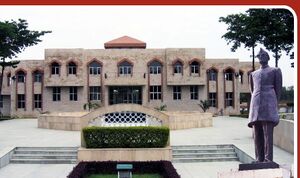 Once on solar eclipse day, like any other pilgrim, he visited Kurukshetra to have a sacred bath in the Brahma Sarovar. He smeared his body with slush from the holy spot and returned as there was little water in the lake. Disappointed with the neglect of a well-known religious place of pilgrimage like Kurukshetra, he set up Kurukshetra Development Board in August 1968.

With his efforts and enterprise, renovation of Brahma Sarovar, Pehowa, Sannehit Sarovar, Jyotisar, Pundrik Tirtha and many other Tirthas could take place. With a vision of making visitors aware about Kurukshetra's cultural, spiritual and historical importance, he set up the Srikrishna Museum.

The Gulzarilal Nanda Institute of National Integration and Peace reflects the gratitude the city owes for the visionary who transformed the future of the city.[1]

When Gulzarilal Nanda died in Ahmedabad on January 15, 1998, his family needed just one bag to pack all his personal belongings. A man who was five-time MP and who served twice as interim Prime Minister of India, Nanda had no property in his name at the time of his death. Nanda had spent his last eight years in Navrangpura colony at Ahmedabad where he was bedridden after an accident. After his death, there was a discussion on whether his last rites should be performed in Ahmedabad or Kurukshetra.