From Jatland Wiki
(Redirected from H.K. Singh)
Jump to navigation Jump to search 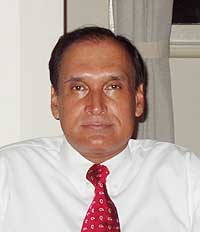 Hemant Krishan Singh or H.K. Singh is an ex senior officer of the Indian Foreign Service (retired from service on 31 December 2010). His last posting was Ambassadoir of India in Tokyo (Japan). Born on 6 October 1950, Ambassador H. K. Singh has a M.A. degree from the University of Delhi and joined the Indian Foreign Service in 1974. He is married to Mrs. Mrinalini Singh and they have two children. He has been India's Ambassador to Indonesia and Colombia. Also served as India's Deputy Permanent Representative at the Indian Mission to the UN in Geneva (Switzerland). He was India's Ambassador to Japan till December 2010, just before retirement from Service.

His wife Madam Mrinalini Singh is an accomplished painter and sculptor. She has held several exhibitions of her art in Geneva, Colombia and Indonesia. Mr H.K. Singh and Mrs Singh are keen golfers.

His gotra is 'Dalal' and he hails from Jakhodha village, near Bahadurgarh (Haryana).