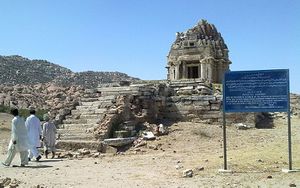 The town is at the foot of the Karoonjhar Hills. At one time the area was under the sea, which had to be crossed; the name "Parkar" means "to cross over". Nagarparkar has on its north Taluka Chachro, and on its west is Taluka Mithi of Tharparkar District, while on east of it lies Barmer (Rajasthan) and on its south is Run Katchh. The area surrounding the city is a rocky belt called Parkar, and the remaining part is a sandy area.

The Karoonjhar hills surround Nagarparkar for 16 miles. The granite stone of this mountain is used for making tiles. There is a saying that the Karoonjhar hills provide 1-1/4 kilos of gold every day in the form of red granite stone, china clay, and honey. In summer, different sounds are audible from the rock due to sulphur deposits.

James Tod[1] writes that Nagar Parkar. — Nagar, or Srinagar, the capital of Parkar, is a town containing fifteen hundred houses, of which, in 1814, one- half were inhabited. There is a small fort to the south-west of the town on the ridge, which is said to be about two hundred feet high. There are wells and beras (reservoirs) in abundance. The river Luni is called seven coss south of Nagar, from which we may infer that its bed is distinctly to be traced through the Rann. The chief of Parkar assumes the title of Rana, as well as his superior of Virawah whose allegiance he has entirely renounced, though we are ignorant of the relation in which they ever stood to each other : all are of the same family, the Hapa-Raj, of which Juna-Chhotan was the capital.

The population of the taluka is 153,106, out of which 90,893 are Hindus and 62,213 are Muslims. There is one rest house beneath the Karoonjhar Mountain, but it partially collapsed during the 2001 earthquake. The town is an ancient place of Hindu worship. Sardharo, Anchlesar, and Jain temples are situated there.

The Bhudesar Mosque was built by Nasir-ud-Din Mahmud Shah of Gujarat in 1505 AD. It is built in the Hindu/Jain architect style.

Jain Temples of Nagarparkar and nearby region

The region once had a significant Jain population. Shri Gaudi Parshvanth Stavan describes the Parkar country as the most glorious of all regions of India.[2] The remains of a number of Jain temples are popular tourist attractions and heritage sites in the region.[3]

Nagar ‘bazaar’ temple: It is present in the main bazar of the Nangar Parkar town. The structure of the temple, including the shikhar and the torana gateway is completely intact. It was apparently in use until the independence of Pakistan in 1947, and perhaps for some years even after that that. There is also a ruined temple outside of the town.

Bhodesar temples: Bhodesar, 3 miles from Nagar, was the region's capital during Sodha rule. Remains of three temples, are present. In 1897, two of them were being used as cattle stalls and the third had holes in the back. The oldest temple, was built in the classical style with stones without any mortar, built around 9th century. It is built on a high platform and reached by a series of steps carved into the rock. It has beautifully carved huge stone columns and other structural elements. The remaining walls are instable and partially collapsed. Parts of the building had been dismantled by the locals who used the bricks to construct their homes. It is perhaps the most spectacular of the monuments in Sindh. The two other Jain temples are said to have been built in 1375 CE and 1449 CE built of kanjur and redstone, with fine carvings and corbelled domes.

Karoonjar mountain temple: at the base of the mountain. AN ancient Jain temple of the 14th century, built on the slopes of the Karoonjhar Hills in Tharparkar engraves a painting; a vulture swirling over the dancing peacock. The local people believe that the vulture symbolises drought and the peacock portrays the beauty and richness of Thar, where Karoonjhar exists for the last 4.7 billion years. [4]

Perhaps, this beauty is the sole inspiration for people who live in the lap of Karoonjhar, and are emotionally attached to it; they tend to come back after long spells of migration; and prefer dying in hunger than leaving the land of their ancestors.[5]

The Karoonjhar Hills are spread over about 16 miles in the south west of Nagar Parkar. The altitude of Karoonjhar is around one thousand feet above sea level.[6]

Within the periphery of these mountains are many ancient places of interest. There are many signs of the Pan Davas. It is said “when their cousins cast the five brothers out of their kingdom for 13 years, the Pan Davas came to Karoonjhar and spent a short time there.” Till today, signs of their presence are visible in the Karoonjhar Mountain. These places are called by names such as Bhimgodo, Bhim Gaddo (Bhim’s carriage), Bhim Tala (Bhim’s tank) and Arjan Ban (Arjan’s Arrow). [7]

Gori Mandir: 14 miles from Viravah. The legendary temple with 52 subsidiary shrines was built in AD 1375-6.