The inscriptions of Buddhists and Jainas give us information on the events which took place after the death of founders of these two religions. We know scarcely anything about the latter part of Ajatashatru's reign. There is evidence that he fought Prodyota, the king of Avanti, and that for a time at least the fortunes did not favour him.[2] 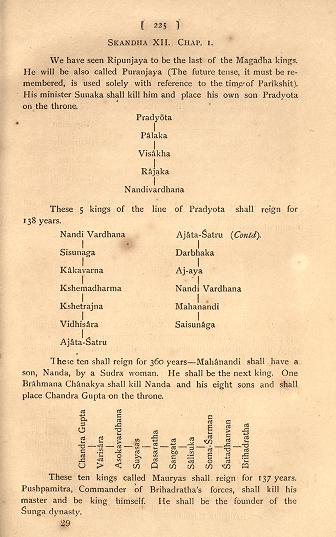 'A study of the Bhagavata Purana; or, Esoteric Hinduism' by Purnendu Narayana Sinha, p. 225 mentions that...We have seen Ripunjaya to be the last of the Magadha kings. He will be also called Puranjaya (The future tense, it must be remembered, is used solely with reference to the time of Parikshit). His minister Sunaka shall kill him and place his own son Pradyota on the throne.

These 5 kings of the line of Pradyota shall reign for 138 years.

Reference - A study of the Bhagavata Purana; or, Esoteric Hinduism by Purnendu Narayana Sinha, p. 225