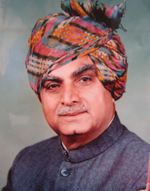 Rao Birender Singh was the second chief minister of Haryana - from March 24 to November 2, 1967 - and was the first leader in the state to constitute a regional party, Vishal Haryana Party, which he later merged with the Congress in 1978.

The first-ever poll to Haryana Vidhan Sabha was held in March 1967. Birender Singh was elected a member of the Haryana Legislative Assembly from Pataudi assembly constituency as Congress Party's candidate. However, he established the Vishal Haryana Party immediately, by defecting from Congress with many MLAs. He was appointed Chief Minister of Haryana on 24 March 1967, replacing Bhagwat Dayal Sharma.

He was elected to the 5th Lok Sabha in 1971 from Mahendragarh on the Vishal Haryana Party ticket.

Rao Birender Singh was the direct descendant of Rao Tula Ram (a most important figure from Haryana in 1857 revolt) and his son Inderjit Singh is an MP from Gurgaon constituency, since May 2014 when he fought the election on BJP ticket.