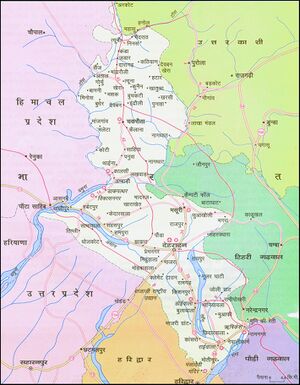 Rishikesh (ऋषिकेश) is a city and a tehsil in Dehradun district of Uttarakhand. It is known as the pilgrimage town and regarded as one of the holiest places to Hindus.

Rishikesh is at 30.103368°N 78.294754°E. It has an average elevation of 372 metres Located in the foothills of the Himalayas in northern India, it is known as the 'Gateway to the Garhwal Himalayas'[1] Rishikesh is surrounded by three districts: Tehri Garhwal, Pauri Garhwal and Haridwar. It is approximately 25 km north of the city Haridwar and 43 km southeast of the state capital Dehradun.

Hṛṣīkeśa is a name of Vishnu composed of hṛṣīka meaning 'senses' and īśa meaning 'lord', thus 'Lord of the Senses'.[2] The name commemorates an apparition of Vishnu to Raibhya Rishi, as a result of his tapasya (austerities), as Lord Hrishikesha. In Skanda Purana, this area is known as Kubjāmraka (कुब्जाम्रक) as Lord Vishnu appeared under a mango tree. Another legend says that fierce fire broke out here. Lord Shiva was angry with Lord Agni and cursed him. Then Lord Agni prayed here for the expiation of his sins. Hence it is also known as 'Agni Tīrtha' (अग्नि तीर्थ) — the holy place to do penance of Lord Agni or Fire God.[3]

Rishikesh has been a part of the legendary 'Kedarkhand' (the present day Garhwal). Legends state that Lord Rama did penance here for killing Ravana, the asura king of Lanka; and Lakshmana, his younger brother, crossed the river Ganges, at a point, where the present 'Lakshman Jhula' (लक्ष्मण झूला) bridge stands today, using a jute rope bridge.[4] The 'Kedarkhand' of Skanda Purana, also mentions the existence of Indrakund at this very point. The jute-rope bridge was replaced by iron-rope suspension bridge in 1889. After it was washed away in the 1924 floods, it was replaced by the present stronger bridge. Another similar suspension bridge Ram Jhula was built in 1986 at nearby Sivananda Nagar.

The sacred river Ganges flows through Rishikesh. Here the river leaves the Shivalik Hills in the Himalayas and flows into the plains of northern India.

Several temples, ancient and new, are along the banks of the Ganges in Rishikesh. Shatrughna Mandir, Bharat Mandir, Lakshman Mandir are the ancient temples established by Adi Shankaracharya. Shatrughna Temple is near Ram Jhula and Lakshman Mandir is near Lakshman Jhula.