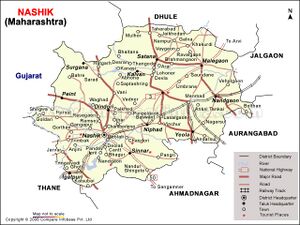 Tringalwadi (त्रिंगलवाड़ी) is a village and site of fort located in the Igatpuri taluka of Nashik district. It is located on the ancient trade route passing through Thal ghat. The fort is located near village Tringalwadi.

The presence of the caves indicate that the caves and the fort might be constructed around 10th century. The fort was built to overlook the trade route which connected Konkan to Nashik area. In 1636 the Shahaji (father of king Shivaji) had to cede it to the Moghuls after the defeat at mahulifort. It is not known when Shivaji took control of this fort, but in 1688 this fort was won by Moghuls. It is one of the 16 forts which was surrendered to British in 1818 after the fall of Trymbakgad fort[2]