Vishal Malik in a Party at New Delhi in 2015

Vishal Malik born 12 March 1989 in New Delhi is an Indian Film Actor. He studied Acting from Whistling Woods International Institute under the Guidance of Shernaz Patel Heading the department and he developed his craft under the guidance of Jameel Khan, Harmender Bhatia.[1] The institute is promoted by Indian Filmmaker Subhash Ghai, Mukta Arts and Film city Mumbai. In July 2014, The Hollywood Reporter named Whistling Woods on its list of "The best film schools in the world". The school was first ranked among the top 10 film schools by The Hollywood Reporter in 2010. 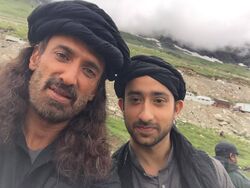 Vishal Malik with Rahul Dev in 2015

Vishal Malik is the son of Ch Dharampal Singh Malik and Sudha Malik.[2] His father is a politician, he was elected to Lok Sabha (Eighth) 1984-89 defeating Chaudhary Devi Lal, former Deputy Prime Minister of India [3] and his Mother Sudha Malik was Member Haryana Public Service Commission and Chairperson Haryana Janhit Congress (BL) (woman Cell)[4]. He has two sisters Shakti Ahlawat and Anita Malik. Meghna Malik and Mahima Chaudhry are also in his relation 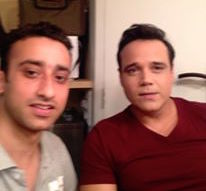 Vishal Malik and Yash tong during shoot in Mumbai

He did his schooling from Sonipat, Haryana. He had developed a strong interest in Acting since his childhood days. [5] After schooling he wanted to make his career in acting but his father wanted him to study law and to be a lawyer like him as he was one of the best lawyers in Haryana.

However Vishal followed his father’s foot steps But his parents never supported him for choosing acting field as his father wanted him to join politics. He then took admission in law and completed his Bachelor of Laws. He completed his law in the year 2012. In the following year, he took admission in "O. P. Jindal Global University" for his master in laws, which is one of the best and most expensive University for law in India. Vishal left this unfinished and took admission in “Whistling Woods International Institute” [6] later, he has done work in art movies, documentaries, short movies and even in commercial cinema. 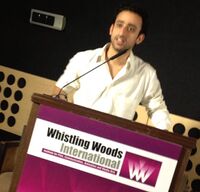 Giving back to society is something that Vishal lives for. It is his ardent desire to help the youth understand that life is precious and shouldn't be wasted by taking Substance abuse.[7] He also helps the less fortunate receive basic health care and education. Over the years, Vishal has constantly supported all kinds of work being done for public. Presently, his aim to educated people about providing basic education and health care to underprivileged women and children.