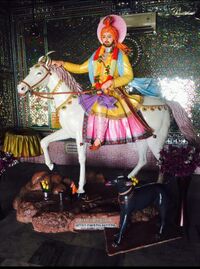 The Chahal Jats affect Joga Pir, originally Joga Singh, son of Rajpal Chahal, who is said to have been killed, after fighting with the Mughals even when he had been decapitated. Joga Pir is their jathera, and a fair is held in his honour on the 4th nauratra in Asauj.

Back to The Reformers / Jat Deities