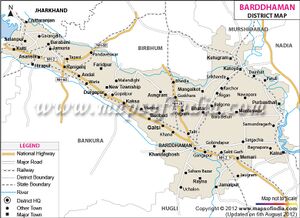 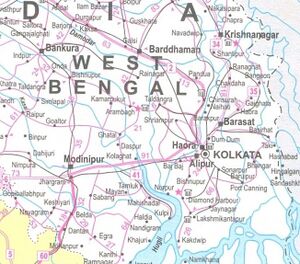 Location of Bardhaman in West Bengal 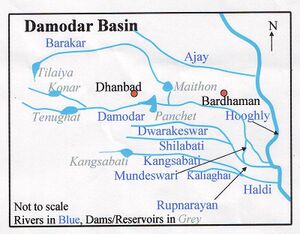 Bardhaman (बर्धमान) is a town and district in West Bengal. Bardhaman became a district capital of British India. Burdwan is an alternative name for the city, which remains in use since the British period.

It is 100 km north-west of Kolkata on the Grand Trunk Road (NH-2) and Eastern Railway. The chief rivers are the Damodar and the Banka.

The origin of this name dates back to 600 BCE and is ascribed to Vardhamanswami or Mahavira, the 24th Tirthankara in Jainism, who spent some time in Astikagrama, according to the Jain scripture of Kalpasutra. This place was renamed as Vardhamana in his honour.

The history of Burdwan is known from about 5000 BC and belonging to the Mesolithic or Late Stone Age. The origin of this name dates back to the 6th century BCE and is ascribed to Vardhaman Swami or Mahavira (599-527 BCE), the 24th Tirthankara of Jainism, who spent some time in Astikagrama, according to the Jain scripture of Kalpasutra. This place was renamed as Vardhamana in his honour.

The first epigraphic reference to the name of this place occurs in a 6th-century AD copper plate found in Mallasarul village under Galsi Police Station. Archeological evidences suggest that this region, forming a major part of Radh Bengal, could be traced even back to 4000 BCE.

During period of Jahangir this place was named Badh-e-dewan (district capital). The city owes its historical importance to being the headquarters of the Maharajas of Burdwan, the premier noblemen of lower Bengal, whose rent-roll was upwards of 300,000.

Bardhaman Raj was founded in 1657 by Sangam Rai, of a Hindu Khatri family of Kotli in Lahore, Punjab, whose descendants served in turn the Mughal Emperors and the British government.

The East Indian Railway from Howrah was opened in 1855. The great prosperity of the raj was due to the excellent management of Maharaja Mahtab Chand (died 1879), whose loyalty to the government especially during the "Hul" (Santhal rebellion) of 1855-56 and the Indian rebellion of 1857 was rewarded with the grant of a coat of arms in 1868 and the right to a personal salute of 13 guns in 1877.

Maharaja Bijaychand Mahtab (born 1881), who succeeded his adoptive father in 1888, earned great distinction by the courage with which he risked his life to save that of Sir Andrew Fraser, the lieutenant-governor of Bengal, on the occasion of the attempt to assassinate him made by freedom fighters of Bengal on 7 November 1908.[1]

Mahtab Chand Bahadur and later Bijoy Chand Mahtab struggled their best to make this region culturally, economically and ecologically healthier. The chief educational institution was the Burdwan Raj College, which was entirely supported out of the maharaja's estate.

Sadhak Kamalakanta as composer of devotional songs and Kashiram Das as a poet and translator of the great Mahabharata were possibly the best products of such an endeavour. Pratap Chandra Roy was the publisher of the first translation in the world to translate Mahabharata in English (1883–1896).[2] The society at large also continued to gain the fruits. We find, among others, the great rebel poet Kazi Nazrul Islam and Kala-azar-famed U. N. Brahmachari as the relatively recent illustrious sons of this soil.

Batukeshwar Dutt an Indian revolutionary and independence fighter in the early 1900s was born on 18 November 1910 in a village Oari in Burdwan district. He is best known for having exploded a few bombs, along with Bhagat Singh, in the Central Legislative Assembly in New Delhi on 8 April 1929.

The city became an important center of North-Indian classical music as well.

The Kankaleswari Kali is also located in the city of Burdwan. Burdwan witnessed, experienced and survived numerous violent conflicts, mainly due to Mughal, Pashtun and Maratha invaders. The city of Bardhaman was visited by notables of the Delhi Sultanate from Raja Todarmal to Daud Karnani, from Sher Afghan and Kutub-ud-din to Ajimuswan to the future Mughal emperor Shah Jahan while he was still a rebel.Bardhman also has a number of Bengali Christians. Although Christians are a minority, still there are many churches in Barthman.