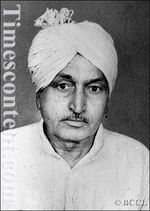 Late Chaudhari Bharat Singh was Ex- Councillor of Delhi for 4 terms, and former Member of 9th Lok Sabha (1984-89). He was famous in Delhi as the Jat Gandhi. He won the Councillor's election on Congress-(I) ticket even in 1977; interestingly then Indira Gandhi had also lost her seat in the election. He played a great role in controlling the 1984 riots in Delhi.

He was first to receive Kisan Award from President of India.
Before his rise in political career, he had been Pradhan of his village Nilothi in 1952.
He breathed his last on 19 April, 2008 at the age of 93 years.