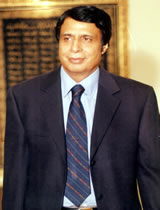 Chaudhry Pervaiz Elahi (Urdu: چودھری پرویز الہی) (November 1 1945 – , is a Pakistani politician. He comes from Bharaich Muslim Jat Clan. He was the Chief Minister of Pakistan's most populous province, Punjab (Pakistan), from 2002 to 2007.

Chaudhry Pervaiz Elahi is a son of Chaudhry Manzoor Elahi and nephew of late Pakistani politician Chaudhry Zahoor Elahi. Zahoor started life as a policeman but he turned his family's fortunes in politics and business His family is commonly referred to as Chaudhrys of Gujrat and they were born into a Waraich family of Jats.

His cousin and brother-in-law, Chaudhry Shujaat Hussain, served as the Prime Minister of Pakistan from May to August 2004. He was the parliamentary leader of the ruling Pakistan Muslim League (Q) Party. He is also the President of PML-Q, Punjab and was earlier Leader of the Opposition in the National Assembly, He gave his resignation to Dr. Fahmida Mirza on 14th September, 2008.

He studied at Forman Christian College, Lahore and completed his graduation in 1967, and thereafter obtained a diploma in Industrial Management from the University of London[1]

He became Chairman of the Gujrat District Council in 1983 and served as a Member of Provincial Assembly of Punjab till 1985.

In the elections of 2002, he was elected for sixth consecutive term from two Constituencies - PP-110 (Gujrat) and Rahim Yar Khan, and became the 18th Chief Minister of Punjab. He remained Chief Minister up to November 22 2007.

In the Pakistani Parliamentary elections, 2008, Elahi ran for the National Assembly as a PML-Q candidate, and it was believed that the party wanted him to become Prime Minister after the elections, although not officially declared as the candidate for premiership.[2] He ran for the seats NA-58 in Attock, NA-61 in Chakwal, and NA-187 in Bahawalpur,[3] along with two provincial assembly seats.[2] After the election, he was reported to have won the National Assembly seat in Attock but lost the other two.[4]

Despite the PML-Q's defeat in the elections, Elahi said that he thought the Party had still performed well enough to take part in a future government.[5] The Party was left in opposition, however. Elahi was the PML-Q's candidate for Prime Minister following the election; in the parliamentary vote, held on March 24 2008, he was defeated by Yousaf Raza Gillani of the PPP, receiving 42 votes against 264 for Gillani.[6]

As Chief Minister of Punjab, Elahi did some very good work for Punjab especially for the Provincial Capital Lahore , which is considered the heart of Pakistan. Among other things, Elahi improved the condition of hospitals in Punjab, opened the Rescue 1122 service, improved the quality and quantity of police forces and attained some other milestones as well.

Elahi is still the President of PML Q in Punjab and is gearing up his party for the next elections, believing that the current government will not last the 5 years.

After the suicide bomb attacks that killed hundreds of supporters during rallies immediately after her return to Pakistan from exile in 2007, the former Pakistan Prime Minister Benazir Bhutto named four persons, including former Intelligence Bureau Chief Ijaz Shah, Chaudhry Pervaiz Elahi, former Sindh Chief Minister Arbab Ghulam Rahim, and the former ISI chief Lt Gen (retd) Hamid Gul, as those who posed a threat to her life. Bhutto instructed a news reporter to reveal this in case she was assassinated.[7]