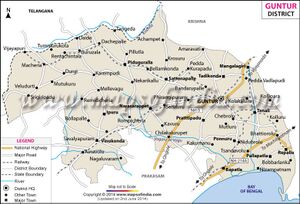 Guntur (गंतूर) is a city and district in the Indian state of Andhra Pradesh. It is situated 64 km to the north of the Bay of Bengal, on the Eastern Coastal Plains.

The earliest reference to the present name of the city can be dated back to the period of Ammaraja–I (922-929 CE), the Vengi Eastern Chalukyan King. It also has its appearance in another two inscriptions dated 1147 AD and 1158 AD.[1] In Sanskrit, Guntur was referred to as Garthapuri. "Garthapuri" or "Guntlapuri" translates to "a place surrounded by water ponds".[2][3] The settlement might have been near a pond, a "gunta" in Telugu; hence, :gunta uru" translates to "pond village" in Telugu. Another source refers to "kunta" (a land measuring unit) which may have transformed to "kunta uru" and later to "Guntur".[4]

The earliest recorded reference of Guntur comes from the Idern plates of Ammaraja I (922–929 CE), the Vengi Chalukyan king. The inscriptions stones in the Agastyeshwara temple in 'Naga Lipi' (an ancient script) dates back to about 1100 CE. It is located in Old Guntur and is considered one of the most famous temples in the city. It is said that Agastya built the temple in the last Treta Yuga around the swayambhu linga and hence it has this name. The 'Nagas' were said to have ruled the region at that time. R.Agraharam and Old Guntur areas are considered to be the older parts of the city.[5] The region has been historically known for Buddhism and the first Kalachakra ceremony performed by Gautama Buddha himself.[6] The place of Sitanagaram and the Guttikonda caves are referred in the ancient texts (Vedic puranas) going back to the Treta Yuga and Dwapara Yuga.[7]Old inscriptions of Satavahana period are found in Chebrolu area south of the city.[8]

With the arrival of the Europeans in the late sixteenth century the city attained national and international significance. The French shifted their headquarters from Kondavid Fort to here in 1752, probably because of the ample availability of water due to the two large tanks. This settlement formed the nucleus of the modern city. The Nizams of Hyderabad and Hyder Ali also ruled the city until it came under British rule in 1788. French astronomer, Pierre Janssen observed the solar eclipse of 18 August 1868 and discovered helium, from Guntur in Madras State, British India.[9] It was made the headquarters of a district named after it that was abolished in 1859, only to be reconstituted in 1904. The city rapidly became a major market for agricultural produce from the surrounding countryside due to the opening of the railway link in 1890. The expansion continued post independence as well and was concentrated in what is now called "New Guntur", with many urban areas such as Brodipet, Arundelpet and suburban areas like Pattabhipuram, Chandramouli Nagar, Sita Rama nagar, Brindavan Gardens, etc.