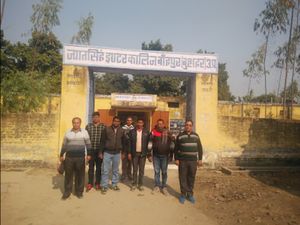 School Name:JAGAT SINGH INTER COLLEGE BANHPUR, BULANDSHAHR
School Code:1056
District Code:9
This school was Inaugurated By Kunwar Surendra Pal Singh Pilania S/O Lt. Sh. Jagat Singh Pilania who was State Minister of Railway in Congress Govt on about 1972. School name was kept on the name on father of Surendra Pal singh.
Fist Principal of this school was Sh. Shandilya Sharma.
Initially this school was up to 10th class, later it was extended upto 12th class after 1977. I myself Veer pal singh pilania have also done 10th class from this school in 1977.
then I took admission in RRKK Inter college at Kuchesar mud fort in 11th class and study upto 12th class. later done graduation from SSV PG college Hapur.
This school is affiliated to the Uttar Pradesh State Board - Madhyamik Shiksha Parishad. Here's a listing of schools in BULANDSHAHR, ordered by their academic performance in the board exams of UP Board Class 12 Intermediate examination(Higher Secondary Examination), March 2016.
Here is a performance analysis of students from this school, in the Class 12 UP Board Examinations (Intermediate exam) of March 2016.

Back to Jat Organizations