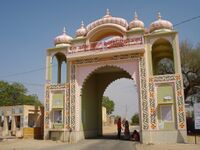 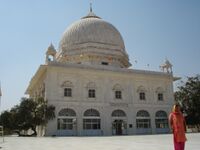 The magnificent marble tomb of Jambhoji at Muktidham Mukam

Guru Jambheshwar (born 1451) (also called Jambhoji) was born in Panwar gotra Jats at village Peepasar in Nagaur district. His father was Thakur Lohat Ji Panwar and his mother was Hansa Devi. He was the only child of his parents. For the first 7 years, Jambhoji was a silent,and introvert child. He spent 27 years as a cowboy.

He was founder of Bishnoi sect. The Bishnoi sect was founded by Guru Jambheshwar after a drought in marwar region of India. At the age of 34, Jambhoji founded Bishnoi sect at Samrathal Dhora on eighth day of black fortnight of the month of Kartika (according to the Indian Lunar Calendar) in 1485 A.D.

He had laid down 29 principles to be followed by the sect. Bish means 20 and noi means 9. Thus, Bishnoi translates as Twenty-niners. Further the Guru told to worship lord Vishnu (Bishnu). Thus the sect called vishnoi or Bishnoi. Killing animals and felling green trees were banned for his followers.

His teachings are available in poetic form in the book known as Shabadwani. Although he preached for following 51 years more, travelling across India, only 120 Shabads, or poetic verses, are available at present. It is claimed that these 120 shabads are a source of great wisdom and are sufficient for an individual to understand and follow the path shown by him.

Out of these 29 commandments, eight aim at preserving biodiversity and encouraging good animal husbandry. Seven Commandments provide directions for healthy social behaviour. Ten commandments are directed towards personal hygiene and maintaining basic good health. The other four rules are guidelines for daily worship.

Marble tomb of Jambhoji at Mukam

Near the village Nokha, District Bikaner the marble tomb of Jambhoji is present. The entombed of Jambhoji is present at Mukam, 18 kms from Nokha on Nokha-Jasrasar road in Nokha tehsil in District Bikaner, Rajasthan. The tomb of Jambhoji is a magnificent and big structure. The whole site is covered with marble. The huge tomb is round shaped. The entire structure is made of Marble and is on elevated position. This can be seen from a distance. There is a magnificent gate at the entrance of this site.

3 kms away from the site of the tomb is a sand mound samarathal associated with Jambhoji, who is said to practice asceticism at this place.

Back to The Reformers