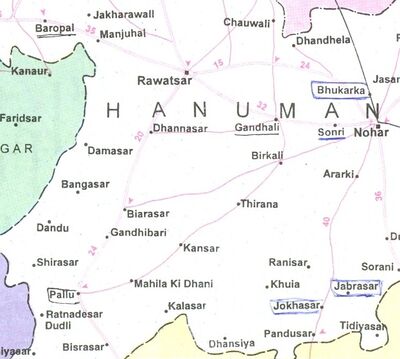 Location of Rawatsar in Hanumangarh district

Kelania village is mentioned in the biography of Swami Keshwanand. Birama (childhood name of Swami Keshwanand) spent his childhood as a shepherd boy. At the age of five years Birama along with family left the village Magloona (his birth place) and moved to nearby city Ratangarh. In Ratangarh his father Thakarsi used to carry Seths (Businessman) of Ratangarh to Delhi on his camel. He lost his father due to snake bite at the age of 7 at Ratangarh in 1890. Birama and his mother moved from here to there in search of fodder for animals and landed at village Kelania, then in Sri Ganganagar district in 1897.

This was the time when Rajasthan was heading for the gravest famine of history during year 1899, known as the chhapaniya akal. There was no vegetation left on the ground. There was no drop of water. All the animals died for want of fodder. People survived on the bark of Khejri trees and seeds of grasses. Even that also became scarce. There was nothing like governance. The ruling Samants were least bothered for the poor people. Birama’s mother Saran could not bear the natural and human calamity and died in year 1899 at village Kelania. The greatest famine of the history, 1899, forced Birama to leave the desert region and moved to Punjab for livelihood.