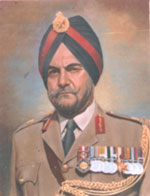 Lieutenant General Joginder Singh Dhillon was a decorated and celebrated Indian military war hero. He was commissioned into Bengal Engineer Group in 1936, was the first Army Officer to be awarded ‘Padma Bhushan’ on 24 November 1965. Gen Dhillon, was the General Officer Commanding a forward Corps. The official citation given for the award was as follows:

"In this Sector, the enemy launched repeated counter-attacks and the conduct of day to day operations called for great tenacity, strong determination and robust mind. Lieutenant General Dhillon displayed all these qualities in abundance and the success achieved by his Corps was to a great extent due to the personality of the General officer."

Having taken the salute from Col Joginder Singh Dhillon, Commandant, Bengal Engineer Group and Centre on 25 November 1949 at the Centre Parade Ground, Pandit Jawaharlal Nehru specifically asked for him to command the First Republic Day Parade to be held in Delhi.

The Parade was held on 26 January 1950 at the Irwin Stadium, Delhi, and was duly commanded by then Brig Dhillon. The Parade had contingents from Army, Navy, Air Force and the Police and it was one of the finest spectacles of the Independent India staged in Delhi during that period. Brig Dhillon later rose to the rank of Lt Gen and was the first post independence Sapper Army Commander (Central Army).

Lt Gen J.S. Dhillon was the Commander of XI Corps which was responsible for the Punjab sector during the 1965 Indo-Pak War. He is credited in producing and conducting the battle plan that smashed the Pakistani battle armour (tanks), turning a potentially dangerous defeat into an amazing victory. After the 1965 war he became a national hero and many portraits were painted of him including the one highlighted above. Even his counterpart Pakistani Generals who fought against him in the 1965 war, on hearing of his death in 2003, paid warm tribute to him as a great general and warrior.

He was married for 62 years to his wife Minnie, who survives him, with whom he had three daughters.

Back to The Brave People/ Military Services