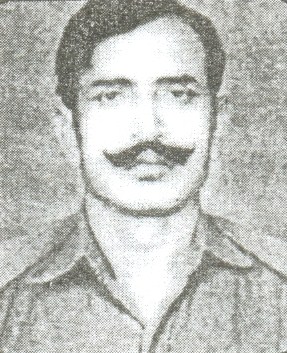 He was born on 28 April 1953 in village Anta Barmer in the family of Pukhraj Karwasra and Smt Sherudevi in Barmer District . His family moved to village Bheemra of Baytu tehsil in Barmer district in Rajasthan in year 1960. He could not get formal education due to socio-economoc conditions. He joined Armed Forces at the in year 1968 in 16 grenadiers. He retired from Indian Army in 1986. In 1988 he joined State Bank of Saurashtra as Security Guard.

Though he was serving State Bank of Saurashtra as Security Guard he frequently used to visit his village and looked after his farming also. On 4 July 1995 he was returning from his field when he found that some deers are running out of fear in the area. He noticed two poachers, Channu and Tamsin along with Loona Bhil chasing deers for poaching. He challenged the poachers. There was a fight with the poachers. Loona Bhil fired at Narayan Ram and he died on the spot. Thus he became the victim of wildlife poachers while protecting life of a deer . The news spread all around Bhimra village and people gathered there. The poachers ran away. He was cremated in his field by roadside. A monumental chhatri has been built in village Bheemra on his farm. He is paid homage here on 4th July every year.

The Government of Rajasthan, Department of Forest, awarded him the prestigious state level Amrita Devi Vishnoi Smriti Award 1999 for his excellent contribution to the protection and conservation of wild animals. Award consists of cash Rs 25000/- and a prashasti. The award was received by her wife Smt Hema Devi.

Back to The Brave People/ The Environmentalists