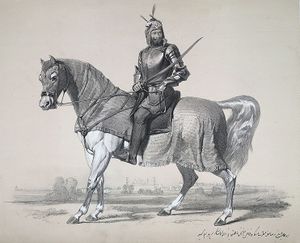 Raja Lai Singh was son of Sirdar Ala Singh.

The District of Mung conquered by Sirdar Lal Singh

Lepel H. Griffin[1] writes that the district of Mung was added to the Pattiala territory, by Lai Singh, son of Sirdar Ala Singh. This young man was brave and energetic, and begged his father to make over to him some territory to manage. Ala Singh told him to win it for himself. He took counsel with Sirdar Khan, the original proprietor of Mung, who had been expelled by the Bhatti Chiefs, Abu Khan and Salim Khan, and his assistance was readily given, for he hoped, if not to recover the district for himself, to avenge himself upon those who had dispossessed him. While the Bhatti Chiefs were absent, Sirdar Khan made his way into the fort with a few followers, and signaled his success to Lai Singh, who brought up the main body of the troops and took possession of the village and adjoining district, which has been held by Pattiala ever since.

Lepel H. Griffin writes:[2]After this farce had been played out, Ranjit Singh marched northwards, accompanied by Raja Bhag Singh of Jhind, to the Satlej, which he crossed on the 2nd December, leaving a garrison of nearly ten thousand men behind him in Ambala, which he had taken from Rani Dya Kour, widow of Sirdar Gurbaksh Singh, who had died in 1783.

Sirdar Gurbaksh Singh had himself obtained Ambala by violence and fraud. The town and district were first conquered by Sangat Singh, who made them over to his brother-in-law Dhyan Singh and went to Singhwala in Firozpnr, where he died. Dhyan Singh also went away, leaving Gurbaksh Singh and Lal Singh as Thanadars in charge ; but, after five years absence, he found they had taken possession for themselves, and refused to give up the town. Raja Lal Singh then built a fort called Jamiyatgarh, on the Pattiala border, rousing the jealousy of Raja Amar Singh, who attacked him in company with the Raja of Jhind and the Rai of Kot, but was unable to prevent